Would Aberdeen be “loser” of Scottish independence?

It was a tale of two energy ministers in Aberdeen this week as the war of words over Scottish independence continued. Declaring Aberdeen would be a “loser” if Scotland votes […] 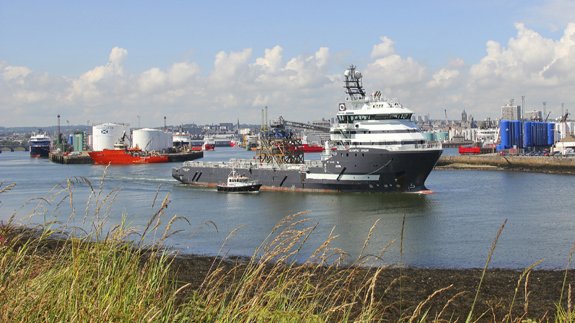 Aberdeen's harbour bustles with vessels in the oil and gas trade. Image: Thinkstock

It was a tale of two energy ministers in Aberdeen this week as the war of words over Scottish independence continued.

Declaring Aberdeen would be a “loser” if Scotland votes to break away from England, the UK’s Business and Energy Minister Michael Fallon drew glum looks from Fergus Ewing, his Scottish counterpart.

The pair was present at the launch of a report on the offshore drilling supply chain help at trade body Oil & Gas UK’s offices overlooking the city’s harbour, brimming with giant boats.

Their one-upmanship was subtly apparent throughout the one-hour event, with Ewing making sure to mention nearly all the Scottish projects which Fallon touched on in his earlier speech.

The UK Tory politician for his part frowned and shook his head several times when Ewing talked up Scotland’s energy projects and even interjected that Britain had paid for one of them.

Finally during a Q&A session the Scottish debate reared its head, with the audience of suited and booted business men and women amused by the clash of views.

Speaking to ELN before the event began, Mr Fallon asserted that Aberdeen would be “one of the big losers” if Scotland decided to go independent.

He said: “This is a world class industry, a large proportion of it is based in Scotland and most of that is based around Aberdeen so clearly it would knock a huge hole in the industry’s prospects if everything had to be reworked”.

Disagreeing, Mr Ewing told ELN independence was an “opportunity” for the sector and suggested that the UK Government hadn’t given the industry as much stability as it could have done.

He said: “That stability in terms of fiscal security hasn’t been evident, has it? Sir Ian Wood in his report recently identified fiscal instability sadly is a feature of the past four decades. That’s a mistake.”

At one stage during the panel there were tolerant laughs around the room as Fallon joked the pair were “easily tempted” to disagree on the issue, belying the high stakes surely seen by many as resting on the result of September’s referendum.