UK Energy Secretary Ed Davey believes the single market can be the “solid backbone” of Europe’s energy security. In a speech at the trade body Eurelectric’s conference in London this […] 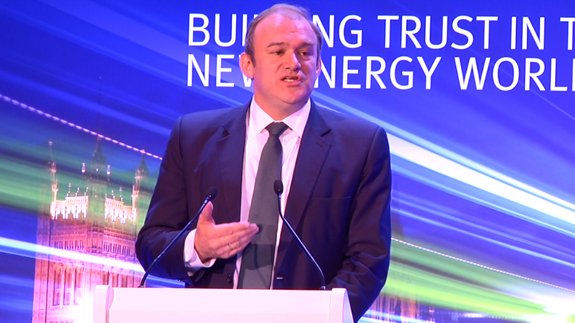 In a speech at the trade body Eurelectric’s conference in London this morning, the Energy Secretary said Europe needs to “get our own house in order” on the internal energy market.

Speaking later on the sidelines of the conference, he told ELN the UK’s policies “fit in perfectly” with European plans.

The European Union wants member states to have a linked up electricity market, with guidelines meant to be adopted by 2014.

Since the spectre of a Russian-Ukraine gas crisis emerged, EU leaders have put more emphasis on working as one rather than separate countries.

Today Mr Davey agreed, saying in his conference speech: “An internal energy market… will not only deliver the lowest available price for consumers but the single energy market can be the solid backbone of Europe’s energy security.

“An integrated EU market combined with improved interconnection is the single most important guarantee for security of supply.”

He added: “Being able to trade energy more freely between ourselves means we can maximise the use of home grown European energy and reduce imports from outside the continent.”

But Mr Davey didn’t say EU plans were perfect, stating the framework for an agreement on cutting carbon emissions needed to be “flexible” so each country could use different mixes of energy types and “not hinder” them.

In October, Heads of State will gather for the European Council to agree on a 2030 target for emissions.

Mr Davey told the audience which included EDF Energy chief executive Vincent de Rivaz and E.ON UK’s boss Tony Cocker: “The next few months will be critical and I’m determined we find the collective political will to act.”