Prime Minister David Cameron and Chinese Premier Li Keqiang signed an agreement to co-operate on nuclear power yesterday, as tipped by ELN on Monday. DECC said it could be worth […] 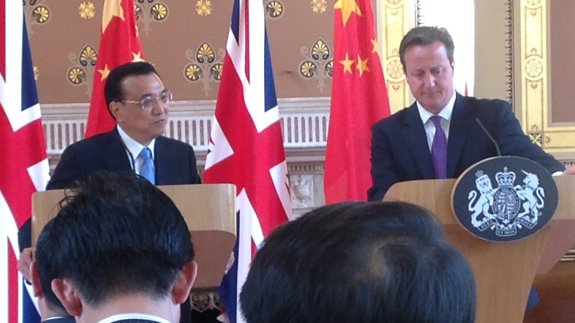 DECC said it could be worth “hundreds of millions of pounds” to British companies over several years.

Another agreement also gave the green light to Chinese companies owning and operating a Chinese designed nuclear power station in Britain, as long as they meet stringent demands of UK regulators.

It clears the way for two Chinese nuclear firms to invest in Hinkley Point C.

At a press conference yesterday David Cameron cited nuclear energy as one of the industries in which the British economy is “the most open in the world”, along with banking and insurance.

He said: “The more foreign companies invest in infrastructure, the more we can use our own resources to invest alongside them.”

Earlier, Premier Li said the UK has “technology which can be married with China’s vast market” but did not specifically mention an industry, adding: “Not only can we expand bilateral trade to $100 billion, we can also make our co-operation of better quality, greater content.”

Nuclear energy was cited as a way to tackle climate change in another deal signed by the two nations.

A joint statement said they both see the “clear imperative to work together towards a global framework for ambitious climate change action, since this will support efforts to bring about low carbon transitions in our own countries”.

Energy and Climate Change Secretary Ed Davey said: “Both Governments recognise that tackling climate change is fundamental to our future and have committed to reduce emissions while enhancing energy security by investing in nuclear power.”