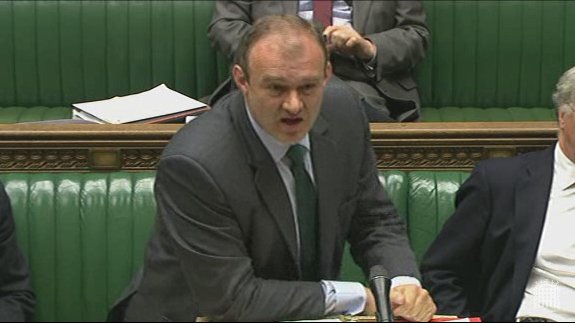 Labour tabled an Opposition Day vote in the House of Commons, asking MPs to give Ofgem powers to force energy suppliers to cap their prices.

The Lib Dem politician ripped into his predecessor, Labour leader Ed Miliband (who wasn’t present on the Labour frontbench) for letting wholesale prices falls 65% and not forcing suppliers to do anything about it.

Mr Davey defended the “forward markets” in which suppliers buy their electricity and said it would be “nothing short of disaster” if government intervened with price regulations.

Earlier Shadow Energy Secretary Caroline Flint set out a measured criticism of energy suppliers for failing to pass on price drops to customers despite “sustained and substantial fall in recent months” of wholesale power prices.

She also invited MPs to “be sceptical” of suppliers’ arguments that trading strategies for buying energy in the future meant they couldn’t pass on price cuts.

Ms Flint said if an energy regulator finds evidence of “anti-competitive prices” – be it Ofgem or a replacement which Labour wants to bring in if it wins the next election – they should have power “not just to write to suppliers politely but power to do something about it”.

Her Labour colleague John Robertson, MP for Glasgow North West said Ofgem “have done a poor job”, not as bad as some say but far too “slowly”. He suggested the Government’s frontbench “needed a reality check” on how the public feel about energy prices.

Much later in the debate, Energy Minister Greg Barker admitted there “is more to be done”, stating a “sensible, dispassionate” investigation (already begun) by the Competition and Markets Authority is the best way to find out if consumers are being fleeced.

The motion was rejected, with 228 ‘Ayes’ from Opposition benches, 283 ‘Nos’ from the Coalition benches.