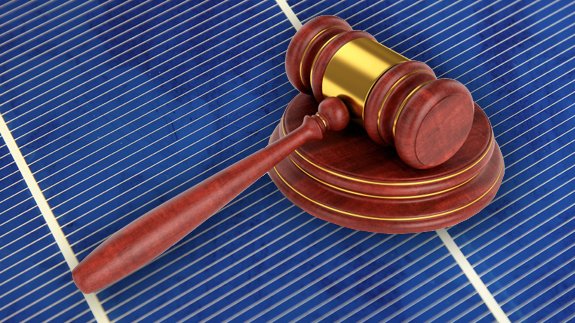 The Government is facing legal action yet again from a host of solar energy companies for changing subsidies.

They believe the sudden withdrawal of support for solar farms above a certain size – 5MW – from 1 April 2015 is unlawful.

Spectators are sure to have a sense of deja vu – as a similar case was brought against the Government three years ago – the High Court ruled an early chop to the solar Feed-in Tariff (FiT) was unlawful – and Solarcentury was also involved in the action.

In the wake of that ruling, another wave of solar firms sued and won £132 million in damages.

Industry groups say they are saddened but unsurprised by the new lawsuit.

Leonie Greene, Head of External Affairs at the Solar Trade Association suggests it reflects the “despair” felt by large-scale solar developers across Britain at “another sudden policy change”.

She adds: “This damaging interference comes despite record levels of public popularity and the record cost reductions achieved by the UK solar power industry.”

The plans were put forward in a consultation document published on 13 May 2014.

Government claims it is not “cutting off support” for solar, with a DECC spokesperson saying: “It would have to compete on price with other established renewable technologies delivering consumers better value for money.”