Computing giant HP has recalled a reported six million power cables which “may pose a risk” of fire or burn hazard. On Tuesday it asked customers around the world to […] 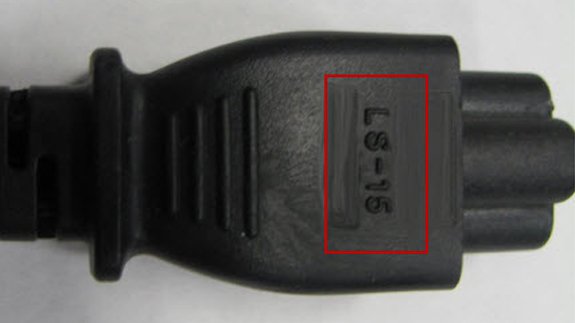 Step one of the procedure to check if your HP or Compaq is a fire hazard: does it have this symbol? (Not all with "LS15" are affected.) Image: HP

Computing giant HP has recalled a reported six million power cables which “may pose a risk” of fire or burn hazard.

On Tuesday it asked customers around the world to send back any affected AC power cords and it will send back another one for free.

The cables came with HP and Compaq laptops or notebook and mini notebook computers sold between September 2010 and June 2012. They were also given out with AC adapters for accessories such as docking stations.

One identifying feature may be the letter and number combination “LS15” – but not all with this are affected.

HP asked customers to check on its website whether their cord is one of the “fire hazard” batch.

ELN followed the procedure to check whether one of its reporter’s computer chargers was affected.

We were reassured: “Your AC Power Cord is not affected and is not part of this replacement program. You may continue using your AC Power Cord. Thank you for your cooperation.”