Hundreds of people marched through central Auckland today to protest against deep sea oil drilling in New Zealand waters. They made their way to SkyCity where the New Zealand Petroleum […] 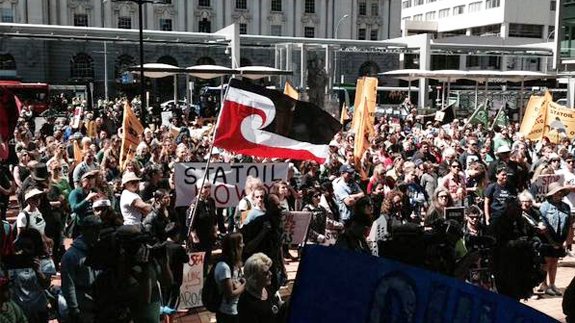 They made their way to SkyCity where the New Zealand Petroleum Summit is being held this week and were opposing potential exploration by Norwegian oil giant Statoil – which is partly sponsoring the event.

Activists were heard chanting ‘Statoil go home, leave our seas alone’ and holding banners that read ‘Statoil, no way’ as part of a four-day protest which started on Saturday.

Nick Young from Greenpeace New Zealand stated: “Today and throughout the summer we will stand together with coastal communities from across Aotearoa to show Statoil and the oil industry that the fight to stop deep sea oil drilling is as strong as ever.

“New Zealand’s and the world’s future is in clean energy not polluting fossil fuels that harm our climate and risk ruining our way of life with oil spills.”

Nils Telnaes, Statoil Vice President however insisted the oil firm has been involved in “thousands of wells offshore Norway”.

He told a news outlet: “We have not had any serious incidents that had long lasting effects on the environment. We’ve drilled more than 70 wells in deep water.”