Floating solar panels have berthed at a fruit farm in Berkshire. The floating energy platform is on a newly formed reservoir which irrigates the farm is said to be the first […] 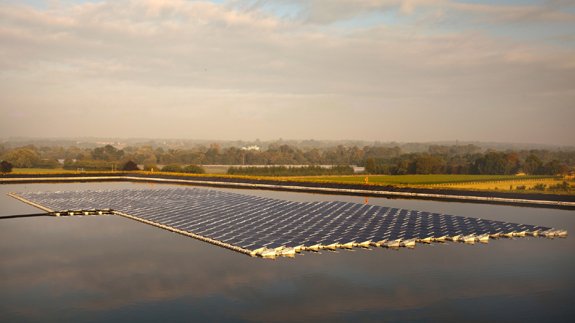 Floating solar panels have berthed at a fruit farm in Berkshire.

The floating energy platform is on a newly formed reservoir which irrigates the farm is said to be the first large one of its kind in Europe.

It is strong enough to bear the weight of 200 kilowatts’ (kw) worth of panels and with a walking platform between them for maintenance.

All 800 panels were put in place over a week according to the farm owners, WR Bennett.

Mark Bennett who runs the Sheeplands farm is also the CEO of newly formed company Floating Solar UK. It means to distribute the panels across the country after forming a partnership with their inventors, the French company Ciel et Terre.

He told ELN: “It was my dream to become a carbon neutral. Now I hope we are and we would like to roll them out across the country.

“Hopefully other businesses can be carbon neutral too.”

The panels join 50kw ground-mounted panels, 100kw worth of solar on the farm’s rooftops and a 70kw biomass boiler, which power the irrigation system, fridges for the soft fruits and buildings which house the tractors.