A fracking great battle at EL2014

It was a debate you didn’t want to miss at the Energy Live 2014 conference in London yesterday. Flying all the way from the US, we had the nation’s very […] 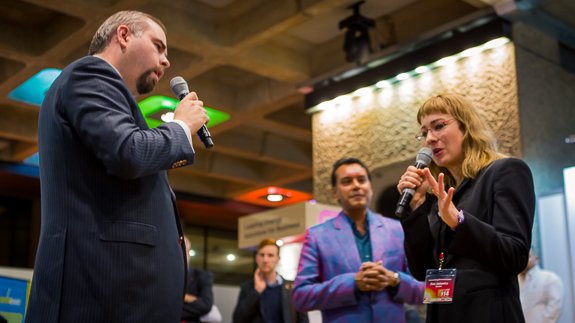 US "Frackmaster", CEO of Breitling Energy battles it out with Ewa Jasiewicz, No Dash for Gas campaigner at EL2014

It was a debate you didn’t want to miss at the Energy Live 2014 conference in London yesterday.

Flying all the way from the US, we had the nation’s very own “Frackmaster” Chris Faulkner, CEO of Breitling Energy and No Dash for Gas campaigner and activist Ewa Jasiewicz battle it out at the Frack Off.

Mr Faulkner argued why the UK should follow the US lead and guarantee Britain’s energy security with natural gas while his opponent insisted fracking is not the way forward and that renewable energy is the way to go.

The Frackmaster said that while Ewa “is entitled to her own opinion”, the facts in the US are pretty clear.

“The industry pays hundreds of billions of dollars’ worth of tax revenue to federal and state governments and employs two million people”, he added.

He claimed “fracking has done more than solar and wind combined planet-wide”, reducing more carbon emissions in the US alone compared to the renewable sources.

Ewa however disagreed, adding: “This is not a profitable industry. This is not an economically viable industry and in terms of the social licence to operate, it doesn’t exist in the USA and trust me, there’s no chance in the UK.”

She went on: “You are behaving in a very irrational way as if climate change doesn’t exist. I’m not sure if you’re aware of the IPCC report… I would trust scientists who study this rather than an energy person that’s out to make profits.”

She added climate change is a reality and that the UK Government “is in a process of denial as well”.

Chris said everyone is working to reduce carbon emissions but “natural gas is the answer…as it will take the world forward”.

An unlikely middle ground was found amidst the battle with Chris agreeing shale gas is not a silver bullet but insisted it should be explored in the UK and “shouldn’t be tossed out the window without trying it”.

Highlights from the debate will be up on Energy Live News next week.