Half naked protest for fuel poverty

Two protesters will spend 24 hours outside Downing Street in just a pair of Bermuda shorts protesting against fuel poverty in the UK. Dubbed “Dying for Heat”, Dan Ashman and […] 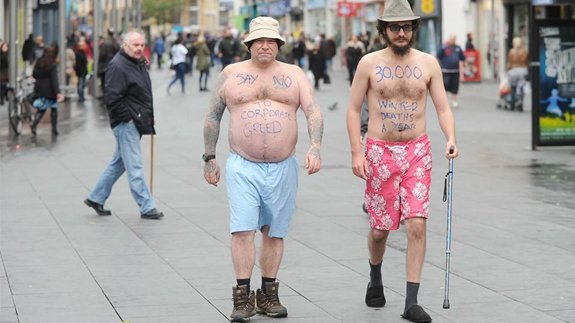 Two protesters will spend 24 hours outside Downing Street in just a pair of Bermuda shorts protesting against fuel poverty in the UK.

Dubbed “Dying for Heat”, Dan Ashman and Raymond Obendencio will strip off to their shorts from 8am this morning (20 December).

The pair hope to raise awareness for the thousands of deaths caused each year by a lack of heating in homes in the UK. This will be the third protest of its kind this year.

A third of winter deaths last year were caused by cold homes, according to the World Health Organisation.

Dan Ashman, one of the protestors said: “It is not acceptable that the companies are getting record profits when it’s killing people.”

The protest is supported by campaign group Fuel Poverty Action. Members of the campaign will hand out ‘Know Your Rights’ cards encouraging people to challenge energy companies with their bills.

Ruth London of Fuel Poverty Action added: “Energy companies and landlords are allowed to implement policies that kill. The Dying for Heat team have it right. This can’t be allowed to continue.”

A spokesperson from Energy UK responded by saying: “No one needs to be cold or worried about their bills this winter, help is available from their supplier or they can call the Home Heat Helpline on 0800 33 66 99 for free impartial advice.”