A new addition to the British landscape was unveiled yesterday, which could become as common place as hedgerows and cows. Yep, National Grid’s first new T-plyon was erected in Nottinghamshire. […] 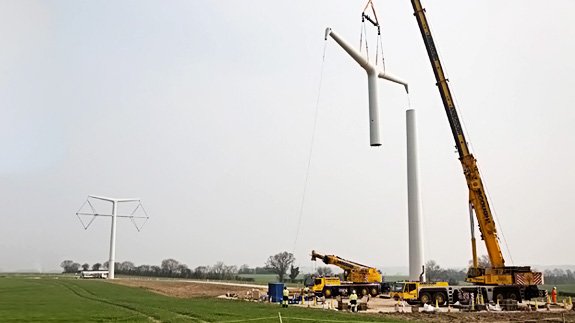 A new addition to the British landscape was unveiled yesterday, which could become as common place as hedgerows and cows.

The first of the new style pylons which at 35 metres is a third shorter than conventional pylons, was put up at the National Grid training academy in Eakring. Six in total will be erected to test how they work and how they look.

The T shaped pylons which were the brainchild of a firm of Danish architects, will be tested in terms of weight, load capacity, how they cope with the weather particularly high winds and frankly speaking, what they look like. Each pylon will look slightly differently depending on the job it does.

David Wright, Director of Electricity Transmission Asset Management at National Grid said: “We developed the new style of pylon so that we could have a 21st century design to offer as we plan new transmission routes.

“The T-pylon is not a replacement for the steel lattice pylon but it’s a new option and in some landscapes its shorter height and sleeker appearance can offer real advantages”.

The new style pylon was the winner of a design competition launched back in 2011.