Fourteen activists in Kayaks who were taken into custody by the US Coast Guard after blocking Shell’s Arctic drilling rig have now been released. They each received citations of $250 (£160) […] 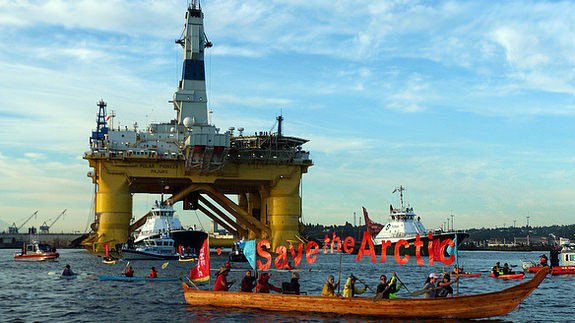 Fourteen activists in Kayaks who were taken into custody by the US Coast Guard after blocking Shell’s Arctic drilling rig have now been released.

They each received citations of $250 (£160) per person after preventing the ‘Polar Pioneer’ from leaving Seattle’s Puget Sound.

Shell plans to use the Polar Pioneer to drill for oil in the Alaskan Arctic in less than two weeks.

The activists unfurled a banner in front of the rig which read, “Shell No” to Arctic drilling.

Greenpeace said around 40-50 activists were on the water and “even more on the shore”.

Paloma Henriques, one of the activists, said: “I believe confronting Shell will encourage more people to take a strong stand against them and other companies who are seeking to destroy this planet for profit.

“We are here to send a message to President Obama that it’s not too late to stop Shell from destroying the Arctic.”

A Shell spokesperson said: “We respect the rights of individuals and organisations to express their opinions related to our Arctic drilling aspirations. We only ask that they do so safely and within the boundaries of the law.

“We remain committed to operating in a safe, environmentally responsible manner and look forward to exploring our Chukchi leases in the weeks to come.”

In April Greenpeace activists climbed aboard the oil rig in protest against the plans.