British actress Emma Thompson has joined 64 activists outside Shell’s Headquarters in protest against the US Government‘s decision to let Shell drill for oil in the Arctic. A polar bear puppet the […] 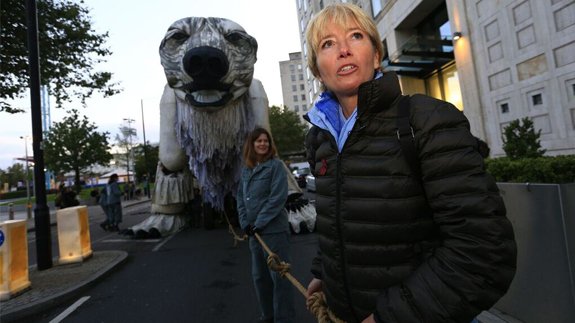 British actress Emma Thompson has joined 64 activists outside Shell’s Headquarters in protest against the US Government‘s decision to let Shell drill for oil in the Arctic.

A polar bear puppet the size of a double decker bus is currently being manoeuvred in front of the energy giant’s entrance.

Six protesters are inside the bear and aim for the bear to remain unmoved until Shell’s Arctic drilling window ends later this month.

The three-tonne polar bear, named Aurora after the northern lights above the Arctic, will thunder a polar bear roar through Shell’s front door at intervals throughout her stay in an effort to stop Shell from drilling.

Shell won Arctic drilling approval in May this year.

Emma Thompson, who performed a poem she wrote to Shell bosses this morning, said: “I’ve been to the Arctic, I’ve seen the beauty, I’ve seen the wildlife and my heart breaks to think Shell is up there right now, drilling for the oil that threatens not only their habitat but ours.

“I’m one of millions of people demanding this company pulls out of the Arctic and this huge polar bear is roaring with our voices.”

A Shell spokeswoman said: “Shell respects the right of people to protest against the activities we undertake to ensure the world’s energy needs are met.

“However, it is disappointing that Greenpeace continually chooses to focus on mounting publicity stunts rather than engage constructively in the debate about how to meet the world’s growing demand for energy while reducing CO2 emissions.”

“We believe we can play an important role in developing the Arctic’s energy resources. We choose to explore there because we have the expertise and experience to operate responsibly and be profitable at the same time.

Last week Charlotte Church performed the song ‘This Bitter Earth’ outside the Shell HQ in protest.