Energy sector must be prepared for climate change

The World Energy Council suggests the energy industry needs to be ready for extreme weather events caused by the increase in global temperatures. According to its ‘Road to Resilience’ report, […] 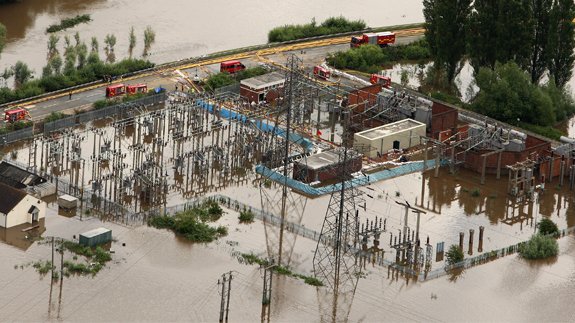 The World Energy Council suggests the energy industry needs to be ready for extreme weather events caused by the increase in global temperatures.

According to its ‘Road to Resilience’ report, the number of extreme weather events have increased more than four times from 38 in 1980 to 174 in 2014 and “many more” are expected to occur in the future, affecting the sector so often that they will become the norm.

Events in recent years such as the tidal wave that caused the Fukushima disaster or the extreme flooding that shut down New York’s power grid, were traditionally seen as ‘freak events’. The WEC report says they must now be considered as far more frequent, if not regular.

These more common weather extremes would result in an increase in energy demand as hot and cold temperatures will rise and strain peak capacity.

Katrina Kelly, lead author of the report, said energy supplies “would also be affected” as thermal plants would be less efficient, nuclear plants would face cooling constraints and stress would increase transmission and distribution systems.

Ms Kelly told ELN: “Quite surprisingly, we’ve looked at every region and we found that there is simply no country that is not going to be affected by the impact of extreme weather events.”

The World Energy Council highlights the solution to protect energy infrastructures from extreme weather events should be “smarter not stronger”.

Its report, which will be presented in the G20 meeting in Istanbul, suggests governments should move from what they call ‘fail-safe’ systems based on predicted events to ‘safe-fail’ structures which are built to be prepared for unexpected weather events.

This solution, it stated, can make energy supplies “more secure, more reliable and can contribute to the quicker restoration of services in case of disruptions”.

Ms Kelly said: “In the past we used to try and identify how often these events would occur. For instance we would say ‘it’s likely that an event is able to occur once a year or once every 10 years’ but from the research we’ve collected we’ve seen that this is no longer sufficient. These events are going to occur and it’s difficult to identify where and how hard they will hit us.”

Increasing the resilience of energy infrastructures can’t be achieved without finance from the private sector, the report stated.

Ms Kelly said: “The private sector must play a role. However, we as the energy sector, need to make sure that we make this a more attractive area of investment for them so they are able and incentivised to participate in the financing and the transition to a resilient energy future.”

The report says transparency and communication are key for stakeholders who are involved in developing new or operating existing energy infrastructure projects.

Christoph Frei, Secretary General of the World Energy Council added: “Current estimates for the cost of energy system adaptation do not fully account for the additional financing required to accommodate these new emerging risks. We need to ensure that resilience can turn these risks into rewards.”

That’s why the role of governments is also very important, the report stated. They need to develop a regulatory framework to “clearly” define the levels of resilience required for energy infrastructure and enable the finance sector to create suitable ways to boost infrastructure investment.

The report once presented at the Istanbul summit will be distributed to more than 190 nations.