The UK Government is doing what it can to reduce bills for consumers as well as ensure security of supply. That’s the view of former Energy UK CEO Angela Knight […] 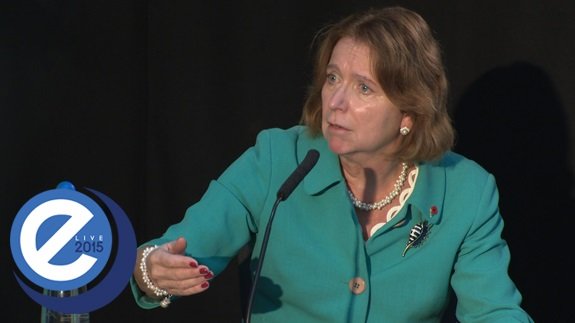 The UK Government is doing what it can to reduce bills for consumers as well as ensure security of supply.

She said: “In the run up to the general election, the Conservative Party made it very clear in their manifesto that they were going to put affordability and energy security first and now what we’re seeing is those very two important points starting to roll out as part of their new energy policy.

“I certainly think as far as people are concerned and as far as businesses are concerned, making sure that those bills are no more than they have to be is very important as is making sure you’ve got your gas and electricity when you need it.”

She added the industry “can’t be surprised” at the onshore wind subsidy cuts as the discussion started “at least 18 months or two years before the general election” and was part of the Conservative Party’s manifesto.

When asked about the role of DECC in setting energy policies and if the department is needed, Ms Knight said: “It is very necessary that we have a focus on energy issues because energy is of vital importance to the UK, whether it’s gas, whether it’s electricity, whether it’s oil, we all rely on it.

“We drive cars, we live in houses, we work in businesses so something as important as that, yes I do think there needs to be a focus and there are climate change agreements that we’ve made. Do I think it all sits harmoniously together? Not particularly because one is an economic policy, the other one can be spread in a lot of different ways.”