A few activists were arrested at the Louvre in Paris yesterday in protest against oil giants Total and Eni sponsoring the museum. The demonstrators created an ‘oil spill’ on the floors […] 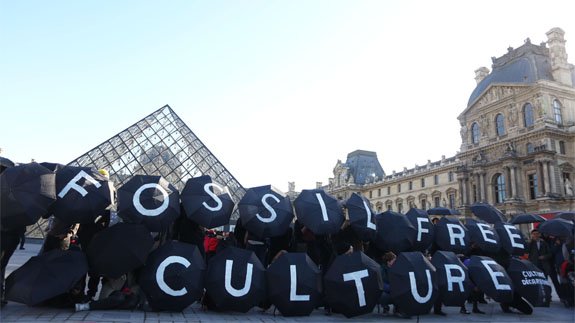 A few activists were arrested at the Louvre in Paris yesterday in protest against oil giants Total and Eni sponsoring the museum.

The demonstrators created an ‘oil spill’ on the floors and hundreds stood outside with umbrellas which read “Fossil Free Culture” whilst performers dressed as ‘climate angels’.

Posters outside of the museum read: “Dear Louvre, when Total sponsors you, you sponsor Total. Don’t sponsor climate chaos.”

Reports claim campaign groups from the US, UK, Norway and Brazil came together for the action.

Total is currently sponsoring an exhibition called ‘A Brief History of the Future’, which the Louvre describes as “one of the most anticipated” of 2015.

In a statement about the partnership on the website, Eni said: “In recent years, the relationship between business and society has changed, reflecting the transformation of the community in which we live. Convinced that the world of culture in general is a fundamental element for growth and development of the company, Eni is committed to the promotion and support of various cultural projects.”