Protestors have set up a 10-metre mock fracking rig and drill in London’s Parliament Square. Greenpeace installed the rig in Westminster today to coincide with the first day of the […] 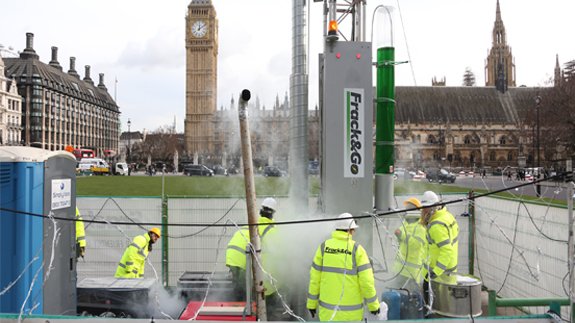 Protestors have set up a 10-metre mock fracking rig and drill in London’s Parliament Square.

Greenpeace installed the rig in Westminster today to coincide with the first day of the Planning Inspectorate’s public inquiry into whether fracking will be allowed in Lancashire.

The rig emits a flame which is being fired up every hour using bioethanol with flood lighting and sound effects of drilling and lorries.

Cuadrilla had submitted an application to explore for shale gas in Lancashire which was rejected last year but the energy company is appealing against the county council’s decision.

Communities Minister Greg Clark said he will have a final say on whether to allow the firm to frack in the area in a bid to fast-track the process but campaigners are demanding decisions should be made locally.

Greenpeace Campaigner Hannah Martin said: “We are here to fight for the future of the English countryside. Ministers are pushing aside local democracy to bulldoze through their unpopular fracking plans.

“We have installed a life-like fracking rig and drill at Parliament Square to show them what people in Lancashire and beyond will have to endure if so-called Communities Minister Greg Clark forces fracking on a reluctant nation.”

The government said ministers have the power to make decisions “on appeals of more than local significance” in line with national planning policy and legislation.

A spokesman added: “Local communities remain fully involved in planning decisions over any shale application – whether decided by councils or government – and strict planning rules that ensure shale development happens only at appropriate sites remain unchanged.”

The government’s latest survey found the more people know about fracking, the less likely they are to support it.