Transparency between third party intermediaries (TPIs), suppliers and customers is crucial to establish fair prices. That was the main message from the panel debate today at the Energy Live Consultancy Conference (ELCC) […] 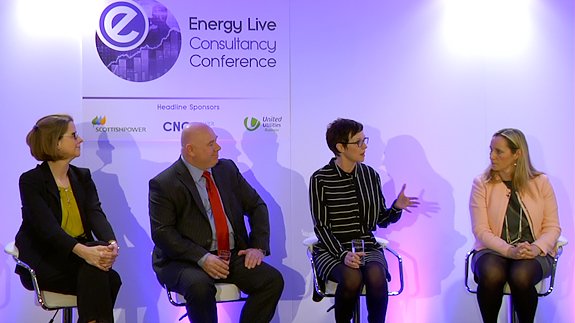 The panel at the Energy Live Consultancy Conference. Image: ELN

That was the main message from the panel debate today at the Energy Live Consultancy Conference (ELCC) at the Etihad Stadium in Manchester.

Jacqui Hall, Managing Director at CNG believes transparency is needed to compete fairly with the major suppliers and brokers.

According to Tony McHardy, Sales Director at United Utilities, competition could be the solution to the “T-problem”.

He said: “Competition sorts this out because of choice. If you have a supplier who doesn’t want to use a TPI as a mechanism to gain business and that supplier has choice, they can actually say no. So for me competition can sort that out.”

She added: “I think there is only one real solution. When I was a TPI, I used to push the suppliers saying ‘can we just change your bill and put transparency of fees on the bill?’ because that would sort it out and I think the majority of TPIs who are playing transparently and fairly and are doing the right thing for customers actually would support that. I think the majority of suppliers who want to have exactly the same piece would also support it but it’s just being very brave, it’s that first move and there’s a fear that they’re going to lose customers.”

Gillian Noble, Head of Energy Services at ScottishPower thinks transparency would be a solution because sometimes “it’s difficult for us to be competitive” and “get a fair price”.