A new bus shelter featuring solar glazing has officially been opened in London’s Canary Wharf. It has been built using innovative transparent photovoltaic glass that is said to generate renewable […] 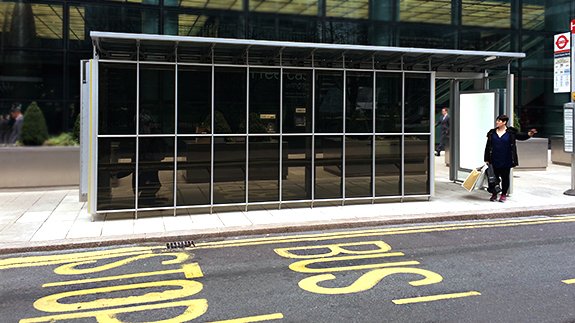 It has been built using innovative transparent photovoltaic glass that is said to generate renewable electricity even in low and ambient light.

It is capable of producing 200KWh of power every year, enough for the average home in the capital.

It will be used to run the bus shelter’s smart signage, with excess power being used for other infrastructure on the estate.

The project was commissioned by Canary Wharf Group and designed and developed by Polysolar.

It follows the PV company being selected as winners in the Cognicity Challenge last year to pilot its technology on the Canary Wharf estate.

It continues to work alongside Canary Wharf contractors and hopes to incorporate the solar PV glass into the facades of new high-rise office and residential developments on the estate.

Hamish Watson, Founder and CEO of Polysolar said: “The solar bus shelter provides not just demonstration of the functionality, performance and aesthetics of our PV glass but represents an important application innovation. Using our solar PV glazing across London’s transport sector, in things like bus shelters, EV charging canopies, walkways and bike parks, could have a significant impact on the city’s emissions, without compromising its environment, architecture or budgets.”