The government’s flagship energy efficiency scheme, which cost taxpayers millions of pounds, forced up people’s bills without any additional energy savings. A damning report from the National Audit Office (NAO) […] 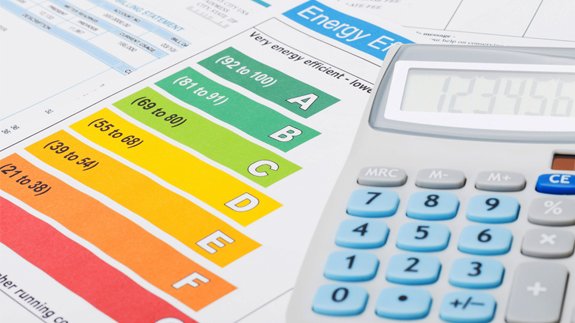 A damning report from the National Audit Office (NAO) states DECC’s design and implementation of the Green Deal, which was scrapped last July, did not persuade householders that energy efficiency measures are worth paying for.

The scheme allows householders to take out loans to fund the cost of installing energy-saving measures such as double glazing and insulation and lead to savings on their bills. However only 14,000 homes took up the offer, with loans worth just £50 million.

That’s in contrast to DECC spending £240 million, which included costs to set up, promote and administer the initiative.

The watchdog claims that has left taxpayers with a £17,000 bill for each home that was improved under the scheme, which ran between 2013 and 2015.

It adds the scheme “looked good on paper” as a way to cut emissions but saved “negligible” amounts.

The UK’s 27 million homes are responsible for more than a quarter of the nation’s total energy demand and greenhouse gas emissions.

NAO Head Amyas Morse said: “The Department of Energy and Climate Change’s ambitious aim to encourage households to pay for measures looked good on paper as it would have reduced the financial burden of improvements on all energy consumers. But in practice, its Green Deal design not only failed to deliver any meaningful benefit, it increased suppliers’ costs – and therefore energy bills.” 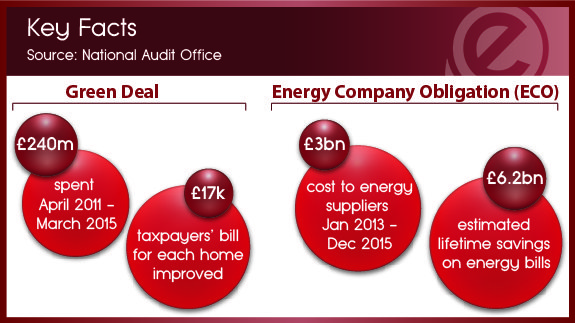 The NAO also looked into the ECO scheme, which requires large energy suppliers to install measures in homes that will reduce CO2 emissions and help ‘harder-to-treat’ properties and fuel poor homes.

The £3 billion scheme was paid for through energy bills and was almost three times more expensive per tonne of carbon saved than previous schemes, the report states.

It adds while DECC achieved its target to improve one million homes, it does not directly correspond to the schemes’ primary aim of reducing CO2 emissions.

It claims they have saved “substantially less” CO2 than previous supplier obligations, mainly because of the initial focus on ‘harder-to-treat’ homes.

DECC expects the measures installed through ECO up to the end of December 2015 to generate 24 megatonnes of CO2 savings over their lifetime.

That’s only around 30% of what previous schemes achieved over similar timescales, the NAO adds.

ECO has however generated potential £6.2 billion of national lifetime bill savings for fuel poor homes up to December 2015, with suppliers on track to meet their obligations by March next year.

If all suppliers fulfil their obligations, the savings are expected to reach £7.9 billion.

The scheme will end on 31st March 2017 and is expected to be replaced with a smaller scheme focusing on mitigating the main causes of fuel poverty.

DECC said: “As the NAO itself has said, government schemes will deliver over £6 billion of energy bill savings to the most vulnerable and have already helped make more than one million British homes warmer.

“This government is clear about the need to have firm financial controls in place to protect consumers, which is why we took action last July to address the issues in this report – stopping funding to the Green Deal Finance Company and setting up an independent review of the energy efficiency sector.”