A total of 270 high-level religious leaders are urging nations to “promptly sign and ratify the Paris Agreement”. The Paris deal which aims to limit the rise of global temperatures […] 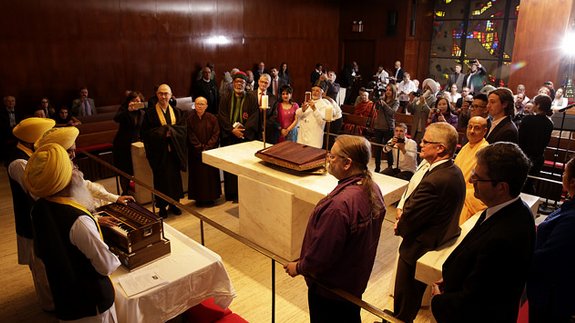 A total of 270 high-level religious leaders are urging nations to “promptly sign and ratify the Paris Agreement”.

The Paris deal which aims to limit the rise of global temperatures well below 2°C was agreed in December by 195 countries and is expected to be signed by more than 130 nations at the UN headquarters this Friday.

The ‘Interfaith Climate Change Statement’, which includes 176 religious groups from around the world and 4,970 individuals including the Dalai Lama, calls for a rapid emissions reduction in communities, businesses and homes and greater flows of finance to tackle climate change.

It also advocates for the swift phase out of all fossil fuels to 100% renewable energy and low carbon technologies by 2050.

The statement adds: “Caring for the Earth is our shared responsibility. Each one of us has a ‘moral responsibility to act’ as so powerfully stated by the Pope’s Encyclical and in the climate change statements by Buddhist, Christian, Hindu, Jewish, Muslim, Sikh and other faith leaders. The planet has already passed safe levels of greenhouse gases in the atmosphere. Unless these levels are rapidly reduced, we risk creating irreversible impacts putting hundreds of millions of lives, of all species, at severe risk. The challenges ahead require honesty and courage and we all must take action to reduce emissions.

“Humanity is at a crucial turning point. We as faith communities recognise that we must begin a transition away from polluting fossil fuels and towards clean renewable energy sources. It is clear that for many people significant lifestyle changes will have to be made. We must strive for alternatives to the culture of consumerism that is so destructive to ourselves and to our planet.”