Barack Obama and Leonardo DiCaprio have joined up to call for renewed action on climate change. The US President and the Oscar-winning actor spoke about the issue to crowds on the […] 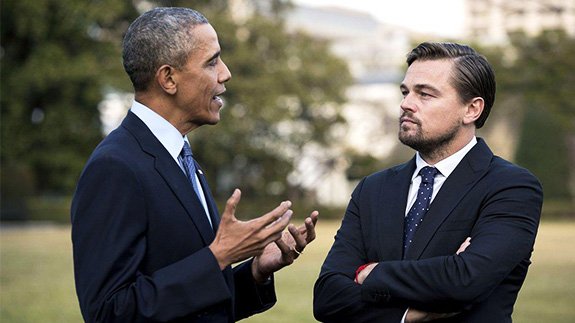 Barack Obama and Leonardo DiCaprio have joined up to call for renewed action on climate change.

The US President and the Oscar-winning actor spoke about the issue to crowds on the lawn of the White House yesterday as part of the South by South Lawn festival. They were joined by Climate Scientist Katharine Hayhoe from Texas Tech University.

Obama told the gathered crowd the world faces “a race against time” to stop climate change. He suggested global efforts to cut carbon dioxide emissions were so far “incomplete” but said “we can still pass the test”.

Donald Trump and Hillary Clinton went largely unmentioned, other than a thinly veiled dig at the Republican presidential candidate from Mr DiCaprio, who is a supporter of Mrs Clinton’s campaign.

Mr Trump does not believe climate change is a threat and has even gone so far as to suggest it is a political hoax on his Twitter: “The concept of global warming was created by and for the Chinese in order to make US manufacturing non-competitive.”