At the Paris Motor Show Toyota, pioneer of the eco car revealed its latest Prius and this one has a solar panel roof! Wandering around the show last week I […] 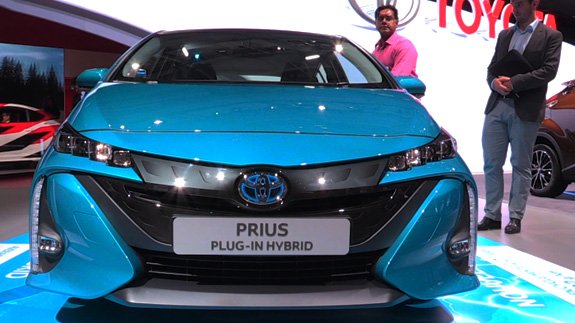 At the Paris Motor Show Toyota, pioneer of the eco car revealed its latest Prius and this one has a solar panel roof!

Wandering around the show last week I was astounded to see how many brands have environmentally friendly models. EVs, hybrids and concept fuel cell cars were everywhere, it appears the time of the eco car is well and truly here and at a price that makes them competitive.

Toyota have history in this area, they launched the Prius almost 20 years ago, its name means ‘original’ in Latin and it certainly was. In a time of gas guzzling giants, this boxy odd looking beast offered the first real environmentally friendly mass market car.

And now they are about to launch its latest version, the Plug-In Hybrid which they believe will offer zero emission driving to the vast majority of owners.

The new car has a plug in to top up its ev range to 50km (30 miles). This Toyota says, covers the vast majority of daily city driving trips. It has a higher speed under electric power of 135km (83 mph) and a solar roof to generate top up energy for the car batteries. In fact the solar roof can power the car up to 5km (3 miles) a day.

Chief Engineer Koji Toyshima told me the solar panel was just the start of the car becoming part of the energy system.

He said: “A car used to be something that just uses energy but with this kind of a system it can also generate energy. All you need to do is get a plug that connects to the home appliances.

“Then you have a set up where the car can give energy to these home appliances. We believe the car can become an independent [energy] entity and doesn’t need lots of infrastructure.”

The new plug in Prius goes on sale next year.

Keep an eye out for more stories from the Paris Motor show over the coming days.