The small village of Ashton Hayes in Cheshire is on the way to becoming Britain’s first carbon-neutral village. Former journalist Garry Charnock initially suggested the villagers should take environmental action […] 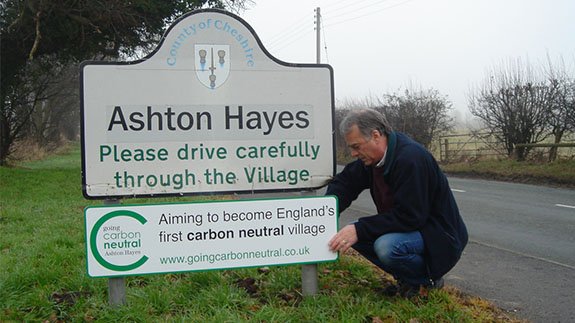 The small village of Ashton Hayes in Cheshire is on the way to becoming Britain’s first carbon-neutral village.

Former journalist Garry Charnock initially suggested the villagers should take environmental action into their own hands during a pub quiz. Other residents agreed with his idea and 10 years later, there are now hundreds of people contributing to the movement.

They banded together to cut carbon emissions by installing insulated windows in their homes, using clotheslines rather than dryers, installing solar panels on their roofs and employing a variety of other green measures.

Mr Charnock said: “We want to show our children, grandchildren and future generations that we have done our best to stop Ashton Hayes contributing to global warming.”

The effort has led to a 24% reduction in emissions so far but the residents are more proud of the international influence they have had. More than 200 towns from places such as Norway and Taiwan have sent representatives or been in touch to learn from the villagers.

No politicians are allowed to speak at group meetings – the residents of the village think this could start divisions and have said they don’t want to be told what to do.