David Davis, the Secretary of State for Exiting the European Union, met with UK energy leaders this week to listen to their views on Brexit negotiations. He chaired a roundtable […] 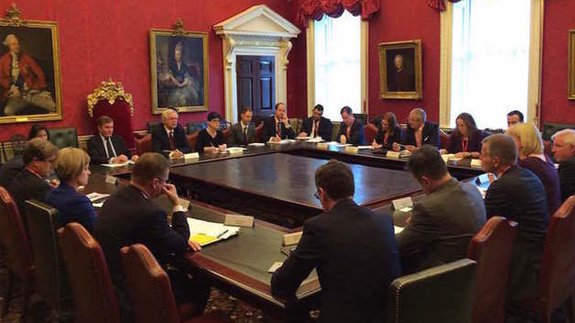 David Davis, the Secretary of State for Exiting the European Union, met with UK energy leaders this week to listen to their views on Brexit negotiations.

He chaired a roundtable to talk about the opportunities Britain’s decision to leave the EU could bring to the industry and inform ministers about key priorities and concerns.

They discussed topics including the gas and electricity markets, nuclear, infrastructure investment and the supply chain.

According to the Department for Exiting the EU, they were “keen to explore the opportunities that could arise from having greater flexibility to make our own arrangements” on pricing, policy, trade and regulatory requirements.

A joint statement from Mr Davis, Baroness Neville-Rolfe and CEO of Energy UK Lawrence Slade said: “Britain’s energy sector has made great strides over the past decade. We are world leaders in areas like tackling climate change, renewables investment and oil and gas innovation.

“Government and industry will work in partnership to identify and address the challenges and seize the new opportunities that arise from Brexit, meet our carbon targets and deliver an energy market that works for all.

“This will be an important part of Britain’s negotiation to leave the European Union. We are determined to work together, ensuring Britain’s supply of secure, affordable and clean energy is maintained.”

The event was the latest in a series of roundtables and other engagement activities the government will be having with business leaders and key stakeholders in the country.

Keep Calm and Brexit is the theme of our conference on 3rd November in London, where we have a great line-up of speakers!

What does Brexit mean for energy? How will the policy landscape affect the investment decisions made by corporations and foreign governments? Join in the debate at #EL2016 and if you are an energy end user or university student, get your free ticket here.