The historic climate change deal that was agreed by governments across the world in Paris last December has come into force. They had agreed to limit global temperature rise to […] 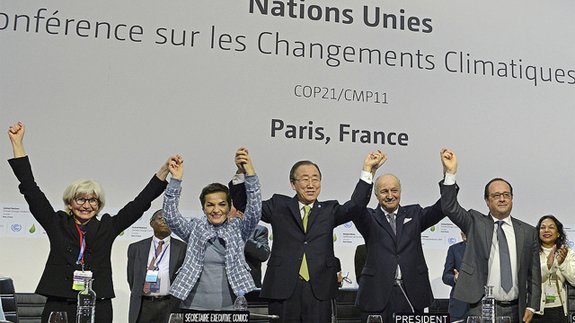 The historic climate change deal that was agreed by governments across the world in Paris last December has come into force.

They had agreed to limit global temperature rise to well below 2C above pre-industrial levels.

The UN Framework Convention on Climate Change (UNFCCC) said the international agreement to bring the Paris Agreement into force in less than a year “reflects the strong, common political will to shift as quickly as possible towards the low carbon, resilient economies and societies”.

To meet the goal, global emissions must peak soon to be driven down very rapidly.

All governments that have so far ratified the agreement, which includes the US, China, India and the EU, are now obliged to work towards the target.

UK Prime Minister Theresa May pledged the nation would ratify the agreement by the end of this year.

Patricia Espinosa, Executive Secretary of the UNFCCC said: “The Paris Agreement’s ambitious and essential goals are now a live reality for every government. From today, ever-increasing climate action becomes an accepted responsibility and a central part of the sustainable development plans of all countries.

“Climate action – faster, smarter, bigger and better – reduces the greenhouse gas emissions which drive climate change and at the same time catalyses the clean power economies and climate-resilient societies which are the foundation on which the future health, wealth and well-being of all people now depend.”

Marrakech will host the first meeting of the Paris Agreement’s governing body, known as the CMA. Work will continue to complete the details of a transparent global regime or rulebook, which will account for, review and underpin greater action by all sides.

The early entry into force calls for a speedy completion of the rulebook, ideally by 2018, according to the UNFCCC.

Marrakech will also give developed nations the opportunity to present their roadmap to mobilise the pledged $100 billion (£80bn) in annual support to developing countries by 2020.