Fuel poverty campaigners delivered a message to the competition watchdog today, demanding “equality” for energy consumers on prepayment meters (PPM). Around a dozen of them from Fuel Poverty Action, National […] 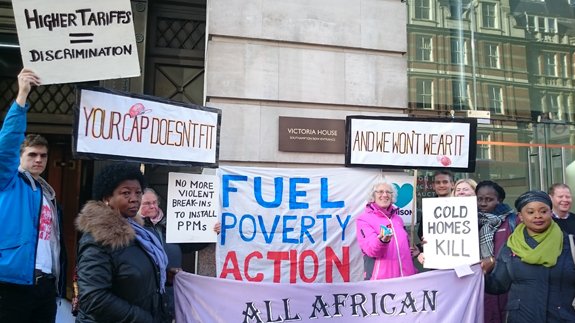 Around a dozen of them from Fuel Poverty Action, National Right to Fuel Campaign, Unison and the All African Women’s Group, held placards that said ‘Your cap doesn’t fit’, ‘Higher Tariffs = Discrimination’ and ‘Cold Homes Kill’.

Their call follows the Competition and Markets Authority’s (CMA) proposals to impose a cap on prices charged to PPM customers, which is expected to reduce energy costs by around £75 a year.

However, campaigners believe the proposal is “discriminatory, unjust and unjustifiable” as they claim PPM users would still be paying much more for their gas and electricity.

They add PPM users pay £300 more on average than those customers on direct debit.

The groups handed in their response “in a tiny doll’s cap to highlight the insult of the CMA’s insufficient proposal”.

It stated: “The higher charges imposed on PPM customers act as a tax on poverty. Instead, prepayment customers should be offered parity with customers paying by direct debit and should be compensated for their many years of paying extortionate prices, during which many people have gone cold, and many have gone hungry in order to keep the meter fed.”

Their response comes as the CMA’s consultation on the technical details of how the price cap for PPM users will be calculated and implemented ends today.

The CMA said it has set the cap at a level “that will deliver significant savings whilst now putting companies off from supplying them at all”.

A spokesperson added: “The cap is in recognition of the particular difficulties prepayment customers face and will reduce bills by £300m a year. An average annual saving of £75 on energy bills will be welcome for hard pressed households.

“Prepayment accounts are more expensive to operate and leave customers with fewer options to switch. That’s why we will keep the cap in place until the introduction of smart meters removes these problems and have urged those involved to press ahead with the rollout.”

The campaigners are also sending letters to Business and Energy Secretary Greg Clark and Prime Minister Theresa May to ask “whether they genuinely intend to challenge an industry that has had a free pass for so long or will they bring in measures like the CMA’s cap that sound good on paper but in practice leave us in the cold”.

Ofgem recently proposed to cap charges for installing PPM under warrant for consumers in debt.