Exclusive: EDF Energy-Lightsource team up for solar and storage trial

EDF Energy and Lightsource Renewable Energy have joined forces for a new “smart home” energy trial. They are offering householders in the South West, South East and the Midlands the […] 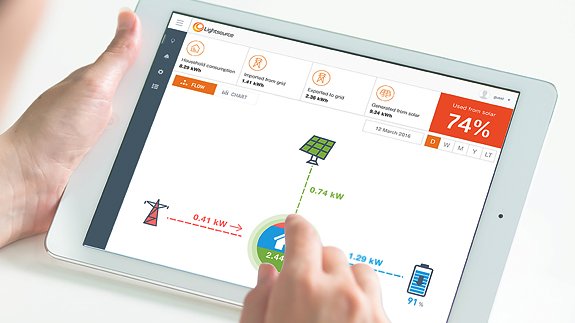 They are offering householders in the South West, South East and the Midlands the chance to get solar panels and battery storage systems in a bid to help them cut their energy use as well as reduce reliance on the grid.

Dubbed ‘Sunplug’, the smart home solution is initially available for the first 100 eligible EDF Energy customers who sign up.

Interested consumers will need to have a house with a south, south east or south west facing roof with enough space to install around 12-16 panels. Lightsource will arrange a home survey to check suitability following which the solar panels will be installed.

Consumers will have the option of either paying for the technologies upfront or through their energy bills.

An app will also be available to monitor the amount of power being generated, used, stored and exported to the grid in real time.

Nick Boyle, CEO of Lightsource told ELN: “The app shows what’s going on but the clever bit of what we’re able to do with this app – or rather the software – is controlling when you fill the battery, when you empty the battery, you look at the weather forecast for the next day, there’s loads of bits and pieces it can do. It’s truly a smart home solution. This is essentially the first step to illustrate to the UK market the potential of what a smart home can actually do. We want the home to automatically be as efficient as it possibly can be from a generation and utilisation of electricity perspective.

“What it also does is it tells you how you are basically spending the electricity that you’re using… The consumers can start understanding why their electricity is the price it is and this education allows them to take positive action to positively impact the price.”

When asked about security concerns, he added “there are security devices in place, reassuring us the information will not be available to anyone who cares to hack”.

Mr Boyle also told ELN the scheme could be extended to between 500 to 1,000 people in 2017, with plans to potentially deliver it across the UK in the future.

Lightsource recently unveiled plans to invest £600 million in the next five years to buy back solar systems from householders and businesses.