AB’s cogeneration is the ideal solution for energy-intensive production processes as used by Becromal, a key player in the world market of aluminum foils for the production of aluminum electrolytic […] 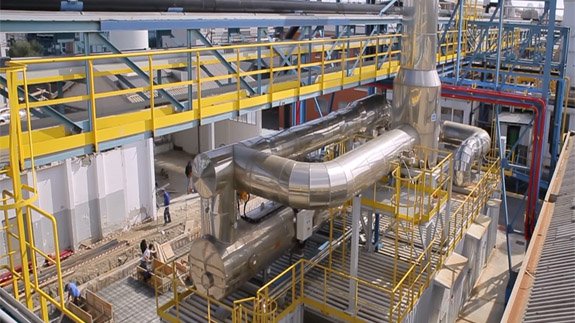 AB’s cogeneration is the ideal solution for energy-intensive production processes as used by Becromal, a key player in the world market of aluminum foils for the production of aluminum electrolytic capacitors. This type of foil production requires large amounts of electricity and thermal energy generated by a cogeneration system already installed at Becromal’s factory in Rozzano near Milano, and by a second system starting up there in these days. AB’s cogeneration solutions allow the generation of electricity and heat while preserving the environment and featuring considerable savings from an economic point of view.

Orzinuovi (BS), 6 October 2015. In recent years, Becromal has paid special attention to the environment, increasing levels of energy efficiency and process optimisation to be even more competitive. In Becromal’s factory in Rozzano, the foils of raw alum inium undergo a multi- stage electrochemical process that modifies the surface structure on a m icroscopic level. These foils are the main raw material used for the production of aluminium electrolytic capacitors that are widely used in electronic devices, household appliances as well as in the industrial and automotive applications.

aconsiderable use of electricity and heat. This is why AB’s cogeneration system proved to be the ideal solution: AB’s first installation, ECOMAX® 33 HE, covered only 60% of the electricity needs and 40% of the heating requirement (thermal oil and hot water). Its second cogeneration system, again an ECOMAX® 33 HE, which will be started in these days, will reach 100% of the electricity and thermal requirements, making the system energy- independent.

From an economic point of view, the operation of the second cogenerator enables Becromal to almost halve its costs for electricity in Rozzano. This results in cost- savings of over 300,000 Euros per month, return on investment can be expected in less than 2 years. The new system also offers benefits from an environmental standpoint: The Rozzano factory is located in an urbanized area with high restrictions concerning emissions. AB’s cogeneration system allows Becromal to fully meet the required standards by lowering CO2 emissions into the air by several tons per year thanks to the fact that the boilers, once utilised to produce hot water and thermal oil, have been put out of use.

Becromal’s choice fell on AB’s winning cogeneration system after a selection made with 11 other international companies, thanks to the approach adopted by AB technicians, to the modularity and the quality of the installations, to the consolidated structure of the company and the extensive and efficient “service” offered.

The first cogeneration module, an ECOMAX® 33 HE, is powered by natural gas and represents an in container, modular solution with a nominal power at full load equal 3,354 electrical kW, with a cogenerated heating capacity of 3,135 kW which refers to an introduced thermal power of 7,462 kW. The system produces electricity that, net of consumption of the auxiliary equipment, is fully consumed by the company’s production site, while the thermal energy produced by the cooling system of the exhaust gas and of the engine is used for the technological purposes of the company in form of hot water at approximately 90 °C. Any excess electricity will be sold via the network through an MT delivery point. The module’s production is approximately 8,200 h/year.

The second cogeneration module is always an ECOMAX® 33 HE powered by natural gas and always available in the container, modular solution. It features a nom inal power at full load of 3,356 electric kW with a cogenerated thermal power of 3,479 kW referring to an introduced therm al power output of 7,462 kW. The module’s production is approximately 8,400 h/year.