Climate cynic sworn in as US environment chief

Donald Trump’s controversial nominee has been sworn in to lead the US environmental department. Oklahoma’s Attorney General Scott Pruitt, said to be a climate change sceptic, won the Republican-controlled Senate […] 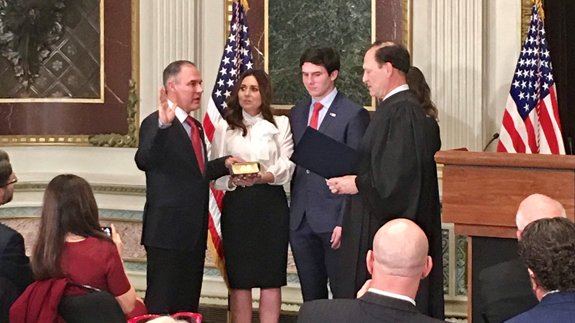 Donald Trump’s controversial nominee has been sworn in to lead the US environmental department.

The news comes despite calls from Democrats to delay the vote until requested emails he exchanged with oil and gas executives are released.

Mr Pruitt is said to have worked closely with the fossil fuel industry and been part of legal action by 24 states against the EPA to stop Barack Obama’s Clean Power Plan, one of the former president’s efforts to curb greenhouse gas emissions.

The EPA states the new chief’s overarching goal is to lead the department “in a way so that our future generations inherit a better and healthier environment as he works with thousands of dedicated public servants at EPA who have devoted their careers to helping realise this shared vision, while faithfully administering environmental laws”.