A 350-tonne machine has been installed at Sellafield to tackle what is said to be one of the most challenging nuclear clean-up jobs. The £100 million Silo Emptying Plant will […] 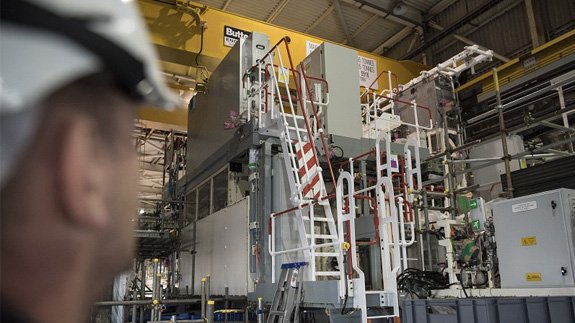 A 350-tonne machine has been installed at Sellafield to tackle what is said to be one of the most challenging nuclear clean-up jobs.

It will be packed into nuclear skips and sent to modern waste stores at Sellafield, pending final disposal in the UK’s Geological Disposal Facility.

The 1960s storage facility, which contains 10,000 cubic metres of intermediate level waste, has been described as one of the most hazardous buildings in western Europe.

The machine is the first of three being installed in the building and will be ready to start retrieving waste in 2018.

It is estimated to take between 20-25 years to complete the task.

Chris Halliwell, Head of the Magnox Swarf Storage Silo said: “This is probably the most complicated and advanced machine ever built at Sellafield.

“There is no job at Sellafield more important than the one being done by this machine. Emptying the waste from this legacy silo is our number one priority.”

The silo took waste from nuclear power stations all over the UK until its closure in June 2000.