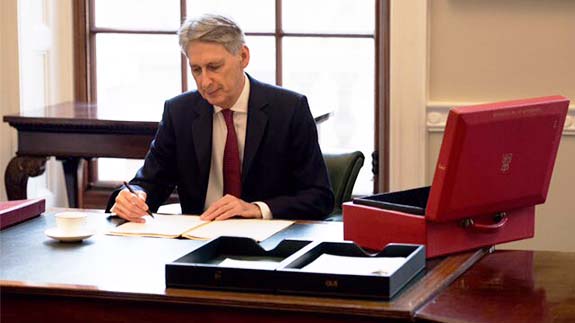 In a wide ranging speech, Mr Hammond declared the Levy Control Framework would be replaced with a new set of controls to be outlined later this year and pledged support for the North Sea oil and gas industry.

To the disappointment of various green groups, very little was discussed on the subjects of energy efficiency, solar tax hikes, the emissions plan or the 25-Year Environment Plan.

RenewableUK’s Executive Director Emma Pinchbeck is keen to work with the government to create the new set of controls replacing the Levy Control Framework.

She said: “We need to ensure that developers and investors in wind, wave and tidal energy projects have certainty so that projects can be built, economic returns can flow and consumers can benefit from the low cost of renewables”.

James Court, Head of Policy and External Affairs at the Renewable Energy Association said: “The decision over the Carbon Price Floor has yet again been kicked down the road and no details have been given for renewables and companies adversely affected by huge business rates increases.

“Whilst end of life oil and gas get yet more help, future low carbon technologies are starved of support.”

He added this is likely to mean businesses and consumers pay over the odds for decarbonisation, enjoy less competition and will be detrimental to preparing for a global future.

John Sauven, Executive Director of Greenpeace UK, said: “Hammond’s first Budget could have put the UK on course to lead the global race for clean technology, healthy air and a strong economy.

“But he failed even to address the pressing issue of air pollution or to mention renewables at all. This means the government is stalling Britain’s clean energy and transport revolution and propping up North Sea oil and gas instead. This is short sighted and has short lived benefits.”

Charlie Elphicke MP, Chair of the Fair Fuel All Party Parliamentary Group for Motorists and Hauliers, approved of the continued fuel duty freeze, which he said was “welcome news for the hardworking classes of modern Britain”.

Richard Black, Director of the Energy and Climate Intelligence Unit (ECIU) said: “The Chancellor’s statement on carbon pricing indicates that the government is preparing for a Brexit scenario in which the levers driving decarbonisation are pulled entirely nationally.

“If we come out of the European Emission Trading System, which is likely, a UK carbon price will be essential. But ministers need to say soon what the price will be, because energy companies are already signing power contracts for 2021.”