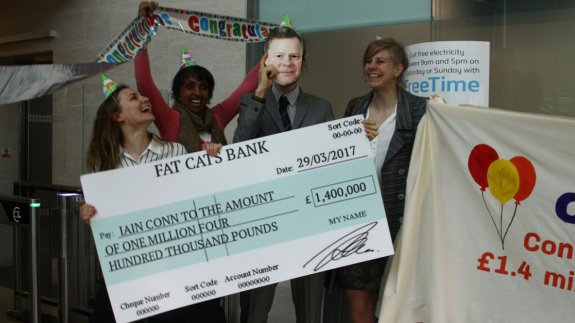 The group says it also targeted the company because it holds a 25% stake in Cuadrilla’s fracking operations in Lancashire.

One of the activists, dressed as a Cuadrilla executive, said: “We’re here at Centrica’s offices to say congratulations to Iain on his well deserved £1.4 million fracker’s bonus. Without his company bankrolling fracking in Lancashire, the industry would be dead in the water.

“Fracking may be devastating to local communities and have no public backing but kudos to Iain for sticking with it through the tough times. Going forward, we hope Centrica continues to profit from Lancashire’s sacrifices and that you can use your millions to shield yourself from climate catastrophe.”

The group has also emphasised the size of the pay boost in light of the millions of UK families living in fuel poverty.

It argues £1.4 million would be enough to pay the energy bills of nearly 4,000 customers.

The stunt is the third in a planned fortnight of action against companies involved with the fracking industry.

Centrica told ELN: “It didn’t disrupt our business and was done in less than an hour. We respect their rights to protest and they equally need to respect businesses rights to go about their business.”