Donald Trump has signed an Executive Order rolling back Obama’s policies aimed at tackling climate change. It is part of the US President’s plans to revive the coal industry by […] 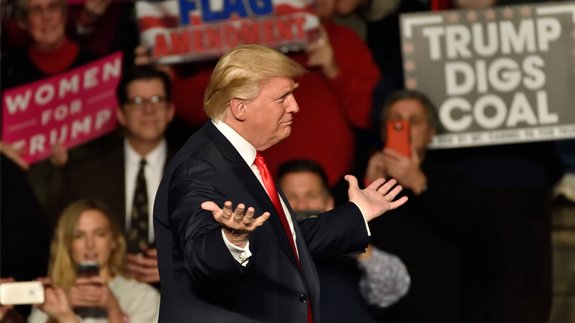 It is part of the US President’s plans to revive the coal industry by putting an end to the “war on coal”.

The Trump Administration claims Obama’s Clean Power Plan could cost up to £39 billion a year and increase electricity prices in 41 states by at least 10%, citing NERA Economic Consulting.

It adds the policy would also cause coal production to fall by 242 million tons, with the rule being challenged in court by 27 states, 24 trade bodies, 37 rural electric co-operatives and three labour unions.

The Supreme Court temporarily halted the plan while the challenges were heard.

The Energy Independence Executive Order seeks to suspend, revise or rescind those that “unduly burden the development of domestic energy resources beyond the degree necessary to protect the public interest or otherwise comply with the law”.

Mr Trump said: “My administration is putting an end to the war on coal. We’re going to have clean coal — really clean coal. With today’s executive action, I am taking historic steps to lift the restrictions on American energy, to reverse government intrusion and to cancel job-killing regulations.

“One after another, we’re keeping our promises and putting power back into the hands of the people. First, today’s energy independence action calls for an immediate re-evaluation of the so-called Clean Power Plan. Perhaps no single regulation threatens our miners, energy workers and companies more than this crushing attack on American industry.”

While some businesses praised the move, environmental campaigners have condemned it, suggesting it will hinder the world’s efforts to meet the climate targets set in the Paris Agreement.

When questioned about Trump’s policy direction, Christoph Frei, Secretary General at the World Energy Council said: “If you follow a fragmented pattern, you end up in a less secure, think of nuclear, in a more expensive, think of the learning curve, or dirty, think of energy efficiency, which is profoundly in opposition of what we stand for. Clearly from our perspective, if you think of prosperity and energy at the heart of this, we cannot like this fragmented thinking.”