Greenpeace activists have installed a plastic sculpture at Coca Cola’s offices to protest against ocean pollution. The environmental campaigners placed the 2.5 tonne model at the front doors of the company’s […] 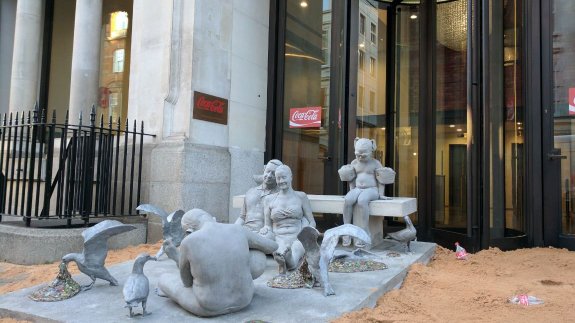 Greenpeace activists have installed a plastic sculpture at Coca Cola’s offices to protest against ocean pollution.

The environmental campaigners placed the 2.5 tonne model at the front doors of the company’s London headquarters in Wimpole Street this morning.

They claim the action is necessary because the global firm is not taking meaningful action to stop the 100 billion single-use plastic bottles it produces every year ending up in the world’s seas and waterways.

Greenpeace says the firm makes a significant contribution to the 12.7 million tonnes of plastic entering the sea every year.

The artwork was created by sculptor Jason deCaires Taylor and features seabirds regurgitating plastic amidst a family beach picnic.

Greenpeace also claims Coca Cola has failed to meet its own sustainability targets and is now restricting the information it discloses on its product packaging – it uses an average of just 7% recycled content in its plastic bottles.

Louise Edge, Senior Oceans Campaigner at Greenpeace UK, said: “90% of seabirds have been found to have ingested plastic. Coca Cola may want us to “Taste the Feeling” but marine life shouldn’t have to.

“Coca Cola is trying to ignore the impact its plastic is having on our environment so we’ve installed a monument to their role in ocean plastic pollution on their doorstep, to force them to confront the issue.”

A Coca Cola Great Britain spokesperson said: “We respect the right for organisations to protest peacefully but we are disappointed by today’s stunt and the report from Greenpeace UK, especially as we have been consulting with them to develop our new sustainable packaging strategy which we will publish in the summer.”