Leonardo DiCaprio and Mark Ruffalo were among the celebrities who joined more than 200,000 people in a climate change protest in Washington DC this weekend. On Sunday, students, workers, indigenous people, community organisations and environmental groups […] 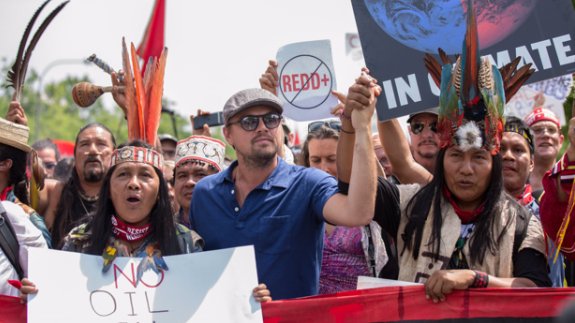 Leonardo DiCaprio and Mark Ruffalo were among the celebrities who joined more than 200,000 people in a climate change protest in Washington DC this weekend.

The march coincided with the climate sceptic’s 100th day in office, during which time he has scaled back funding for the Environmental Protection Agency and worked to lift restrictions on mining, oil pipelines and greenhouse gas emission limits.

The march, which extended for more than 20 blocks, also included Hollywood stars Edward Norton, Evangeline Lilly and the singer Sting.

Mr DiCaprio tweeted following the event: “Today’s #ClimateMarch leaves me inspired & hopeful for our future. We must continue to work together & fight for #climatejustice.”

Tens of thousands more people took part at more than 370 related marches across the country, with the aim of promoting a “a clean energy economy that works for everyone” and to stand up for “climate, jobs and justice”.

It was one of 2,646 climate change events organised across 156 nations on Sunday.

Mark Ruffalo tweeted: “Nobody is safe when oil companies can trample communities w/ toxic #oildrilling, This is long overdue.”

US Energy Secretary Rick Perry reportedly wants Donald Trump to stay in the Paris climate accord but renegotiate it.