Hawaii has become the first US state to formally adopt pledges backing the Paris climate agreement. Governor David Ige and Hawaii’s county mayors and representatives signed two bills and a […] 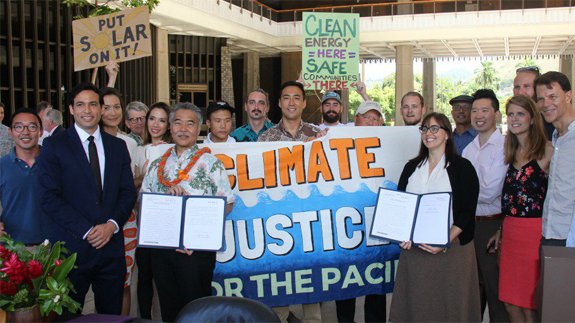 Hawaii has become the first US state to formally adopt pledges backing the Paris climate agreement.

Governor David Ige and Hawaii’s county mayors and representatives signed two bills and a mayors’ agreement that support the commitments of the climate accord.

It makes Hawaii the first state to go against President Donald Trump, who recently pulled out of the Paris treaty.

The first law to come into force includes strategies and mechanisms to cut greenhouse gas emissions across the state.

It states: “Regardless of federal action, the legislature supports the goals of the Paris Agreement to combat climate change and its effects on environments, economies and communities around the world.”

A task force will also be created to set up the scheme and advise on climate resiliency.

Governor Ige said: “Hawaii is committed to environmental stewardship and we look forward to working with other states to fight global climate change. Together, we can directly contribute to the global agenda of achieving a more resilient and sustainable island Earth.”