Cuadrilla has breached its planning permission by delivering a drilling rig at its Lancashire site overnight. The rig was disassembled at the Plumpton Close site at around 4.45am on Thursday, […] 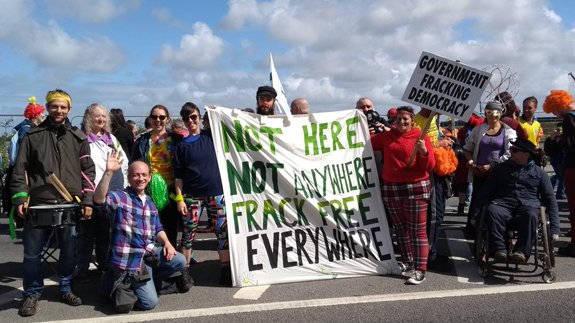 Cuadrilla has breached its planning permission by delivering a drilling rig at its Lancashire site overnight.

The rig was disassembled at the Plumpton Close site at around 4.45am on Thursday, instead of the permitted time from 7.30am.

It will be used to drill a pilot well, around 3,5000 metres deep, to identify the best place for two exploratory wells.

Lancashire County Council said Cuadrilla had breached the terms of its planning permission by delivering equipment on heavy vehicles outside the permitted hours of 7.30am and 6.30pm.

A spokesperson added: “We’re currently investigating the vehicle movements which we understand took place overnight and are in breach of planning permission. We are writing to the operator requiring them to put measures in place to prevent a recurrence as well as considering what further action to take.”

Cuadrilla defended its decision, saying the rig was delivered before the scheduled time to “avoid yet another major road blockage by protesters”.

Chief Executive Francis Egan added: “With the recently increased, aggressive protest activity outside our site in Lancashire, directed by London-based Reclaim the Power, we decided, following consultation with the Lancashire Police, to take delivery of the rig in the early daylight hours of the morning.

“This was done to avoid yet another major road blockage by protesters inconvenience to local road users and potential impacts on commuter and protester safety.”

Ellie Groves, spokesperson for Reclaim the Power said: “While they congratulate themselves, we won’t be distracted by today’s news and it will only strengthen everybody’s resolve to keep fighting.

“Cuadrilla have been trying to frack in Lancashire for years but thanks to the strength of the local community they have been stopped at every turn. We will continue to take action and prevent such a reckless and undemocratic industry getting a foothold.”