ScottishPower Renewables has been granted planning consent by Energy Secretary Greg Clark for a 1.2GW “next generation” offshore wind farm. The East Anglia THREE project will include 172 “larger and […] 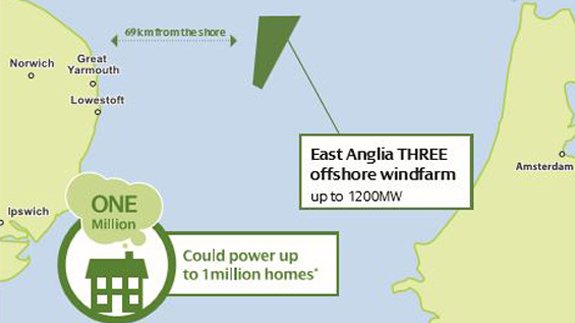 ScottishPower Renewables has been granted planning consent by Energy Secretary Greg Clark for a 1.2GW “next generation” offshore wind farm.

The East Anglia THREE project will include 172 “larger and more efficient next generation” turbines, up to a height of 247 metres – two-and-a-half times the size of Big Ben.

According to ScottishPower, the offshore wind farm is the “best value” project to go into construction in the UK at £119/MWh and costs are expected to reduce even further in future auctions.

To be built 69 kilometres off the Norfolk coast, it is expected to produce enough electricity to power nearly one million homes.

The energy firm is currently delivering the 714MW East Anglia ONE project, which is due to be fully operational in 2020.

It is developing four projects in total in the area, with a capacity of 3.5GW.

CEO Keith Anderson said: “Offshore wind has delivered on its promises from the outset. Our sector has met every technical and political challenge, grown the UK’s supply chain, and improved the technology at a rapid pace to allow projects to be deployed in ever harsher conditions. At the same time, the level of cost reductions achieved would more commonly be seen in consumer electronics.

“With the support of a highly-skilled supply chain, East Anglia THREE will further enhance the UK’s leading position in offshore wind. No other sector ticks all of the boxes in its ability to support the Government’s plans for rebalancing the economy and promoting economic diversity through the Industrial Strategy.”