‘Pirates’ for the planet arrested after VW diesel protest

Two Greenpeace activists have been arrested after boarding a cargo ship in an attempt to block the transportation of Volkswagen’s (VW) diesel cars to the UK. Clean air campaigners in […] 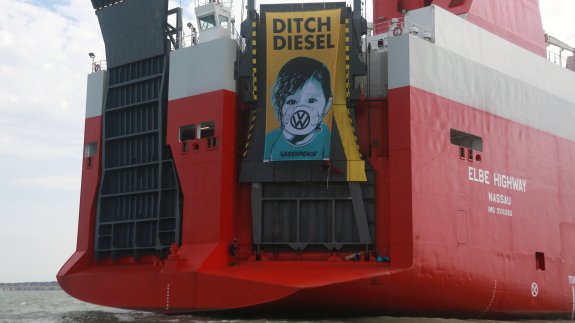 Two Greenpeace activists have been arrested after boarding a cargo ship in an attempt to block the transportation of Volkswagen’s (VW) diesel cars to the UK.

Clean air campaigners in kayaks and boats scaled the 23,500-tonne vessel in the Thames Estuary yesterday morning to protest the manufacturer’s continued sale of diesel vehicles, which they say significantly contribute to air pollution and are “toxic and dangerous”.

They suspended themselves from a 27-metre-high unloading door, refusing to disembark until VW commits to take the 1,200 vehicles back to Germany.

The action follows the 2015 scandal that surrounded the manufacturer after it was found to have cheated emission tests.

More than 40 other volunteers scaled the fences at the ship’s intended destination, Sheerness Port, gaining access to the vehicle park, where several thousand VW cars await distribution to suppliers.

The activists removed car keys to immobilise the vehicles and left large labels on top of the engines urging the firm to stop making diesel cars.

These protesters were still present at the site this morning.

A VW spokesman said: “The ship contains a variety of Volkswagen Group vehicles, including petrol, diesel and plug-in hybrid models. The diesel vehicles, which are the subject of the protest, meet strict Euro-6 standards.”

However, the firm has recently announced a scrappage scheme to get rid of polluting vehicles as well as unveiled a new range of electric cars.