IEA: $31bn a year needed for universal energy access by 2030

Providing universal energy access by 2030 would require an investment of $31 billion (£23.6bn) a year. That’s equivalent to less than 2% of global energy investment, with a majority of […] 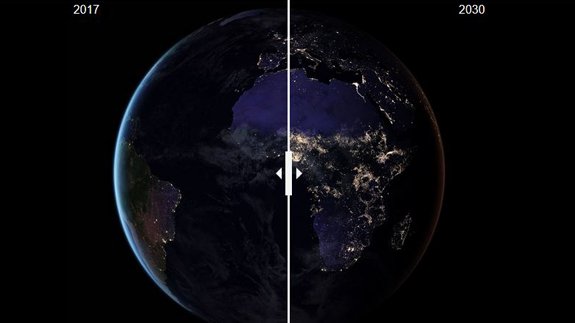 Geographic energy model shows what the night sky over Africa would look like by 2030 compared to today with affordable and sustainable energy for all. Image: IEA

Providing universal energy access by 2030 would require an investment of $31 billion (£23.6bn) a year.

That’s equivalent to less than 2% of global energy investment, with a majority of it needed for sub-Saharan Africa and renewables, according to the International Energy Agency (IEA).

It reveals the most cost-effective strategy for achieving it in developing countries is compatible with meeting global climate goals.

The analysis of 140 countries also found it would prevent millions of premature deaths every year.

It adds the number of people without access to electricity fell to 1.1 billion last year from 1.6 billion in 2000.

Developing countries in Asia are said to be making significant progress, with many countries “well on track” to providing energy for all by 2030 while India is set to reach the goal in the early 2020s.

Despite the progress however, 674 million are to remain without access to power in 2030 – 90% of people in sub-Saharan Africa.

Renewable energy is “catching up quickly” to fossil fuels, mainly coal, providing more than a third of new connections in the last five years.

By 2030, green energy is set to provide new power access for three in five people.

Around 2.8 billion people however still rely on coal, kerosene and biomass for cooking, roughly the same number in 2000 – with 2.5 million people dying prematurely every year as a result of household air pollution.

The IEA suggests policymakers must also place clean cooking at the top of their agenda to achieve the same results as they have done with electricity.