Elon Musk has unveiled the prototype of Tesla’s first electric truck. The Tesla Semi, which the car manufacturer will start producing in 2019, will be equipped with a semi-autonomous driving […] 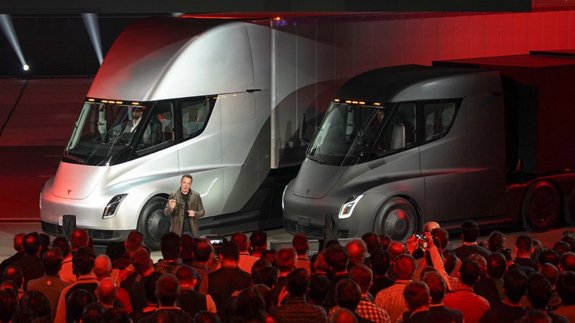 The Tesla Semi, which the car manufacturer will start producing in 2019, will be equipped with a semi-autonomous driving system.

It will have a range of 500 miles on a single charge and is expected to challenge trucks that run on diesel.

It is part of Tesla’s efforts to move the economy away from fossil fuels.

Mr Musk said: “It’s not like any truck that you’ve ever driven.”

The company tweeted: “Tesla semi drivetrain is guaranteed to last 1M miles = to more than 40 trips around the earth.”

It has also unveiled a new Roadster, the new version of its original sports car and is said to be the “fastest production car ever made”.

Mr Musk added: “The point of doing this is to give a hardcore smackdown to gasoline cars… Driving a gasoline sports car is going to feel like a steam engine with a side of quiche.”