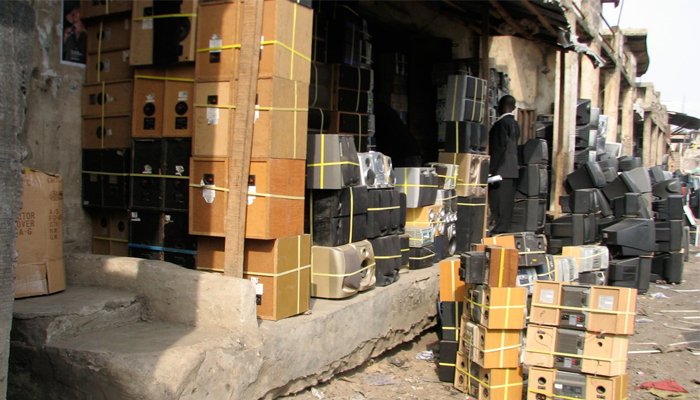 Tens of thousands of tonnes of electrical waste (e-waste) are being shipped in used vehicles from European ports to Nigeria.

That’s according to a two-year UN-backed study into used electrical and electronic equipment (UEEE), which reveals a continuing “severe problem” on non-compliance with international and national rules governing such shipments.

The annual volume of imported e-waste was assessed at around 60,000 metric tonnes in both 2015 and 2016 – around three fourth of that came from EU ports, mainly Germany and the UK at around 20% each.

It was followed by Belgium, Netherlands, Spain and Ireland.

The report from the UN University and the Basel Convention Co-ordinating Centre for Africa (BCCC Africa) states almost 70% of the UEEE reaching Lagos each year arrived inside vehicles destined for Nigeria’s second-hand auto market, while only 30% arrived in shipping containers.

It also found more than 60% of the UEEE imported in containers was declared in official paperwork to be household goods but imports in “roll-on/roll-off” (Ro-Ro) used vehicles – so called because they are driven onto and off the ships rather than being transported in containers – were “mostly undeclared”.

Professor Percy Onianwa, Director of BCCC Africa said: “The importation of UEEE in vehicles is economical for the shippers because it fills valuable space during shipments. However, because in particular the contents in RoRo-vehicles are not yet on the radar for such tests, this practice serves to avoid inspections and functionality tests on UEEE by the regulatory agency, resulting in many tonnes of e-waste arriving illegally into Nigeria.”