Two arrested for chained protest at Durham coal mine

Friends chained themselves together outside mine to protect local wildlife 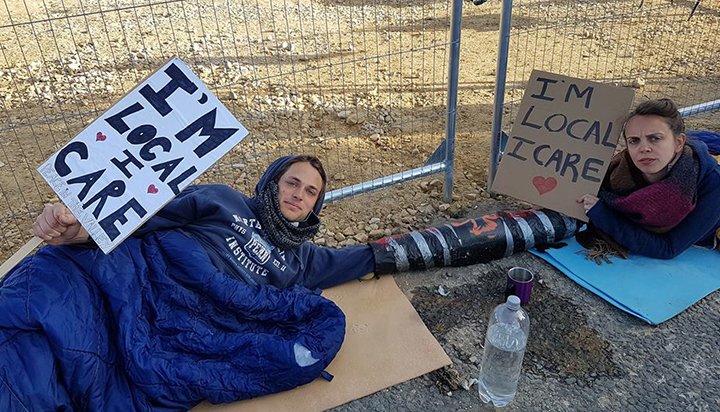 Two people were arrested today after chaining themselves to the gates of a planned surface coal mine in County Durham.

Childhood friends Thomas Davison and a girl called Bobbi, who are both 28, chained themselves as a “last resort” to delay works at the Bradley extraction site in the Pont Valley. The site operated by the Banks Group, was given planning permission and could produce over half a million tonnes of coal if it goes operational.

However, there has been a campaign to prevent mining in the valley for many years due to concerns from locals that it could put the health of residents and wildlife at risk. The pair were arrested early this morning.

June Davison, mother of protestor Thomas, said direct action was needed to delay preparatory works at the site, which needs to be completed by 3 June: “We’ve been fighting this since the 25 years that we’ve been living here. It’s moving very quickly… I can see the diggers from the bottom of my garden.”

The Campaign to Protect Pont Valley argues that there are protected Great Crested Newts on the site, which is disputed by the Banks Group.

Ms Davison claims the Banks Group had offered the local community 10p per tonne of coal extracted from the site, which would amount to around £50,000.

In a statement, Durham Constabulary said: “A busy road has reopened after being partially closed for several hours” with both protestors arrested on suspicion of obstructing the highway.