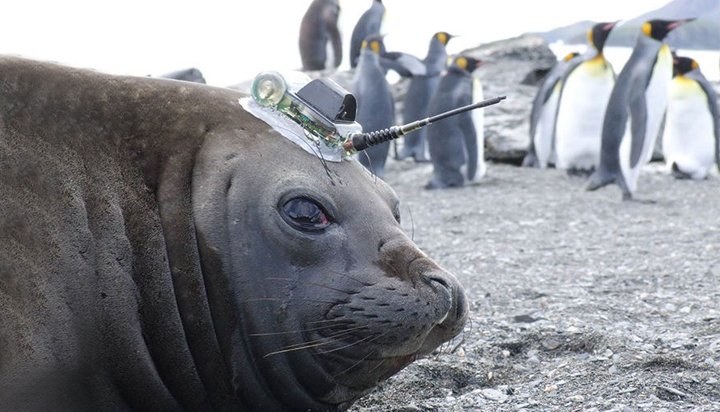 Scientists in the UK have recruited seals from the coast of West Antarctica to help measure the effects of climate change.

A squad of seals were equipped with sensors that measured the temperature and salinity in the Amundsen Sea – the deep diving animals collected data that could be used to sharpen projections of rising sea levels.

Measurements of the warmth and saltiness of the water were sent by the seals as they moved around the area and dived from the surface of the ocean down through the water to the seabed in their hunt for food.

The data sent through satellite from more than 10,000 dives over an area of around 150,000 square km found the deep-water current known as the Circumpolar Deep Water (CDW) is bigger, warmer and saltier in the winter months than during the summer, which suggests there is likely to be more melting of the ice sheets during the winter.

The warm band of water is thought to be accelerating the melt of the West Antarctic ice sheet, which if lost entirely could raise sea levels by 3.2 metres, according to scientists at the University of East Anglia (UEA) and the Sea Mammal Research Unit (SMRU) at the University of St Andrews.

Helen Mallett, who led the study at UEA said: “We were able to collect much more information from the seals than all the previous ship-based surveys in the area combined and it was clear that, at least during the seasons we observed, there were substantial differences in temperature between the seasons.

“Although more will need to be done to measure these differences over a number of years, it’s clear that enlisting seals to collect this kind of ocean data will offer useful insights for climate change modellers who are attempting to predict how fast sea levels will rise.”

Scientists said the data will also be useful to marine biologists as it will provide new understanding of the behaviour of seals in the Amundsen Sea and how that might be affected by climate change as well as commercial fisheries.

The team will be heading back to the Amundsen Sea next year to enlist the help of another group of seals to monitor this remote region as part of the recently announced International Thwaites Glacier Collaboration.