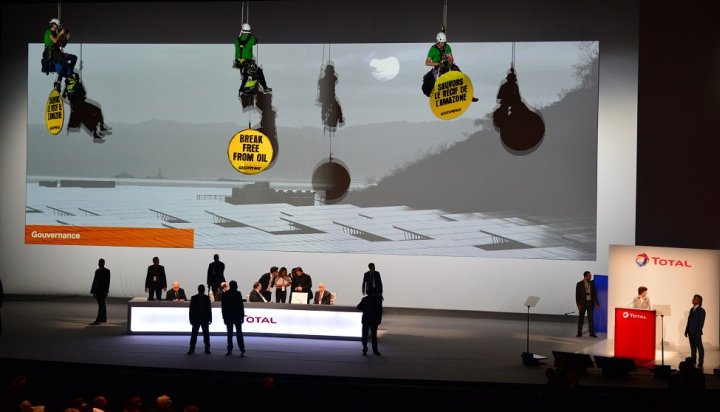 More than 250 Greenpeace activists hijacked the oil firm’s meeting in Paris to protest its plans to drill in the mouth of the Amazon and French Guiana.

Four of these activists descended by ropes from the ceiling above the stage, as CEO Patrick Pouyanné began his presentation.

At least 20 more gained access to the Palais des Congrès building, where a number chained themselves to fixtures in the main hall.

As the remainder of the 250-strong group protested outside the venue, those inside attempted to disrupt the meeting with chants and whistles.

Total wants to explore Brazil’s Foz do Amazonas basin, which geologists estimate could contain up to 14 billion barrels of oil.

The CEO told shareholders and protestors: “Our position on the Amazon project has not been abandoned. We have our rights and we have to obviously respect Brazilian laws.

“It is also clear that Brazil’s environmental regulators are under immense pressure from other organisations. We are exchanging information with them.”