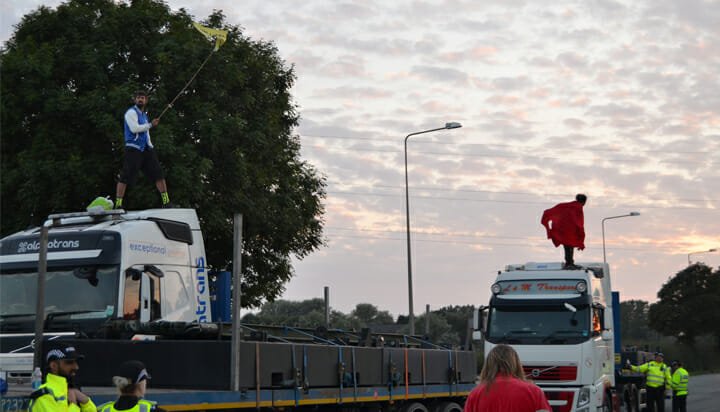 Three anti-fracking activists have been jailed after they stopped a convoy of lorries with drilling equipment in Lancashire last year.

Roscoe Blevins, 26, Richard Loizou, 31 and Richard Roberts, 36, are believed to be the first environmental campaigners to be jailed since 1932.

Mr Blevins and Mr Roberts have been sentenced to 16 months in prison and Mr Loizou for 15 months. Another protester, Julian Brock, 47, has been given a 12-month suspended sentence.

They were charged after a four-day protest blocked the trucks heading to Cuadrilla’s Preston New Road fracking site in July last year.

They were found guilty of public nuisance after a seven-day jury trial at Preston Crown Court.

Campaign group Frack Free Four tweeted: “We are shocked and saddened at the 16-month jail sentences that the #FrackFreeFour have received. This is wholly disproportionate to their truck protect actions in July 2017. Our civil liberties are under threat.”

Executive director John Sauven added: “Peaceful protest is the safety-valve of a healthy democracy. It allows ordinary people to protect their health, families and homes from harm when all other safeguards have failed. It’s a strange society that massively rewards those responsible for causing more climate change while putting those trying to stop it in jail.

“As the world’s leading scientists are about to issue their latest warning on the existential threat fossil fuels pose to our living world, these Lancashire protesters deserve our gratitude, not a prison term. They have done what this government promised to do but is yet to deliver – making sure that we can leave our children and grandchildren a healthier environment than the one we found.”

A spokesperson from Cuadrilla said: “We have always respected the right to peaceful and lawful protest. However, we will continue to condemn unlawful, irresponsible and reckless behaviour that at best inconveniences and costs law abiding local business and commuters and at worst puts them at risk of harm. It is, in our view, a shame that it has come to this but the Crown Court has today taken the correct decision in imposing custodial sentences.”