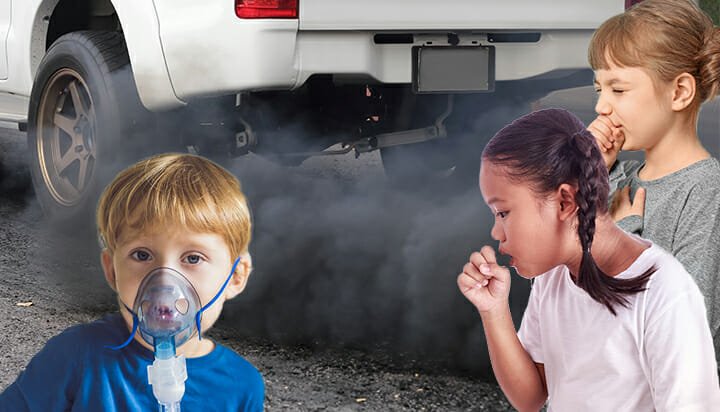 Around 93% of children under the age of 15 years across the globe breathe polluted air that puts their health and development at “serious risk”.

That’s according to the World Health Organisation (WHO), which found around 1.8 billion children are exposed to fine particulate matter (PM2.5) levels above its air quality guidelines.

It also estimates around 600,000 of them died from acute lower respiratory infections caused by dirty air in 2016 and children who have been exposed to high levels of air pollution may be at greater risk for chronic diseases such as cardiovascular disease in later life.

The report adds when pregnant women are exposed to polluted air, they are more likely to give birth prematurely and have small, low birth-weight children.

It suggests one reason why children are particularly vulnerable to the effects of air pollution is because they breathe more rapidly than adults and therefore absorb more pollutants.

They are also closer to the ground, where some pollutants reach peak concentrations, especially when their brains and bodies are still developing.

The WHO states air pollution also impacts neurodevelopment and cognitive ability and can trigger asthma and childhood cancer – children exposed to highly polluted air may be at greater risk for chronic diseases such as cardiovascular disease later in life.

It particularly has an impact in low and middle income countries, where families burn fuels like wood and kerosene for cooking, heating and lighting – exposing children to higher levels of pollution compared to children who spend more time outside the home.

Dr Maria Neira, Director of the Department of Public Health, Environmental and Social Determinants of Health at WHO said: “Air pollution is stunting our children’s brains, affecting their health in more ways than we suspected. But there are many straightforward ways to reduce emissions of dangerous pollutants.

“WHO is supporting implementation of health-wide policy measures like accelerating the switch to clean cooking and heating fuels and technologies, promoting the use of cleaner transport, energy efficient housing and urban planning. We are preparing the ground for low emission power generation, cleaner, safer industrial technologies and better municipal waste management.”