Floating wind ‘could contribute £34bn to UK economy by 2050’ 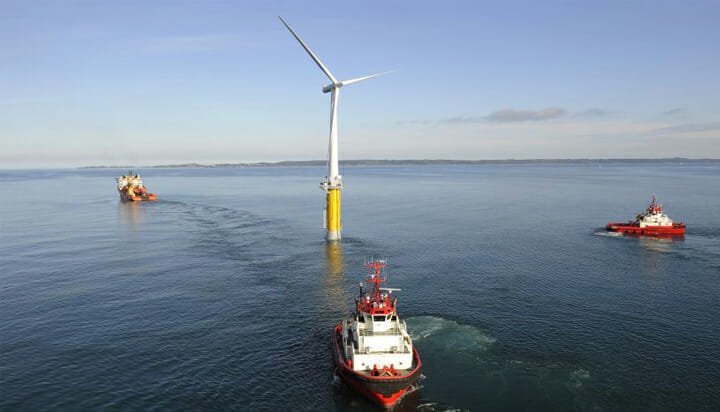 Floating wind projects have the potential to contribute nearly £34 billion to the UK economy by 2050 and play an important role in supporting the development of the offshore wind supply chain.

That’s according to a new report, which suggests it could also create 17,000 jobs during that period and contribute at least 10GW towards the UK achieving 50GW of offshore wind capacity – but large-scale deployment would be imperative to realise the ambition.

The floating wind industry is currently at an early stage of development – there are two operational test and demonstration scale projects in Scotland but also interest in future commercial developments elsewhere in the UK, especially in Cornwall.

The report from the Offshore Renewable Energy (ORE) Catapult, commissioned by Crown Estate Scotland, states floating wind could support the offshore wind supply chain, with 57% UK content expected by 2031 and 65% by 2050.

It indicates it would be possible to continue to grow the sector in the UK with the right type and levels of early stage support.

It adds the global opportunity is large, with emerging markets in Japan, US, China, Taiwan, Korea, Norway, Spain and Portugal reprising both growing export opportunities but also competition for UK companies.

The total market is estimated to grow to at least 4GW installed by 2030 and 55GW by 2050, representing annual markets of at least £3.1 billion and £7.1 billion respectively.

The report states the UK could deliver annual export value of at least £230 million by 2031 and £550 million by 2050, “with the appropriate supporting actions”.

Sian Wilson, Senior Development Manager at Crown Estate Scotland said: “At a time when the need to tackle climate change has never been greater or starker and policy support for innovation, industrialisation and regeneration of high-quality jobs is increasing, the floating wind opportunity ticks all the boxes.

“Thousands of UK jobs, global exports and clean and secure energy generation are all up for grabs – if the right government support is in place.”