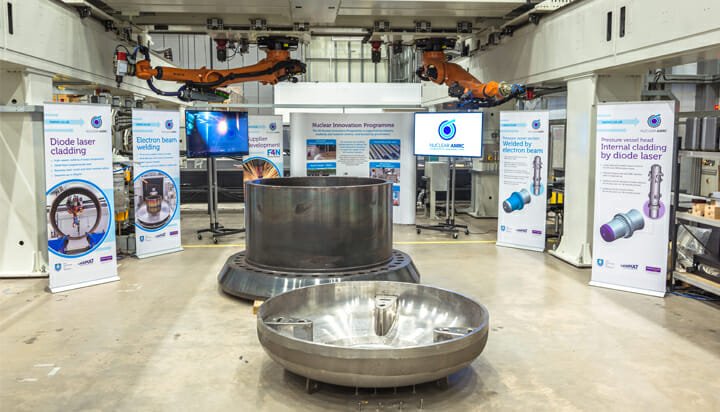 The UK Government has announced it will be providing £32 million for businesses to test small modular nuclear reactors and bring them to market.

The Advanced Manufacturing and Construction Programme will allow companies to bid for a share of the funding and help them commercialise the technology, which could “radically reduce” the costs associated with the nuclear industry.

SMRs are smaller than conventional nuclear power station reactors and are designed so a majority of the plant can be built in a factory and transported to site for construction.

Developers will also be invited to submit design proposals to identify potential risks with proposals early on, in an effort to reduce investment risks for potential backers.

The announcement was made by Nuclear Energy Minister Richard Harrington at the Manufacturing and Technology Centre in Coventry, which hosted experts from across the nuclear, finance, construction and manufacturing sectors to explore the investment opportunities of small modular reactors (SMRs).

The first small reactors are expected to be built as early as 2030, with potential for exports worldwide.

Mr Harrington said: “Hosting this first ever conference, bringing together more than 200 influencers from across the industry, demonstrates our commitment to enhancing our world-leading nuclear sector.

“Increasing competitiveness both nationally and regionally in the sector is part of our modern Industrial Strategy and this summit could help UK industry seize the global challenge of taking this new generation of new nuclear power from concept to construction.”

Earlier this year, the Expert Finance Working Group said the government should provide subsidies to developers of mini nuclear power stations like it did with the offshore wind industry.

In June 2018, the government launched the Nuclear Sector Deal outlining its shared ambition for the UK nuclear industry in the UK as part of the modern Industrial Strategy.

It committed to facilitating an event to bring together vendors, utilities, energy intensive users and the finance sector to further develop credible commercial propositions that could be financed by the private sector.

The UK nuclear regulators – the office for Nuclear Regulation (ONR), the Environment Agency and natural Resources Wales – will commence Generic Design Assessment (GDA) of new, small reactors next year.  With the government expectation that all future designs will go through this process, all interested parties will be able to register interest this year with BEIS, and applications for GDA entry will be accepted for review by government from early next year.